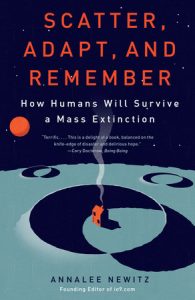 (This review honors the stated preference of the author to use “they/them” pronouns. The book was published prior to that request, so readers may notice a difference between the pronouns on the book’s jacket and those in this review.)

I remember 2013 like it was merely eight years ago. Among the many things that took place that year, Annalee Newitz published their book Scatter, Adapt, and Remember: How Humans Will Survive a Mass Extinction. I wish I had read it eight years ago. It’s a very good book, filled with the hard science and strong optimism that characterizes Newitz’ work. Written for a general audience, at times it feels like the kind of textbook I wish I had ever had. Unfortunately, reading it now, two presidents, several horrible weather and climate events, and a pandemic later, I am not as persuaded of the premise of survival as I might have been in a less dark time–say, eight years ago.

I will freely admit that the cynicism I bring to the book is no fault of the author’s. Newitz is a gifted writer. Their prose draws you in. They are passionate and intelligent. They do not talk down to a general audience. Nor do they assume their audience cannot grasp some of the harder scientific principles they introduce. Newitz invites their readers to join them on a journey of discovery. Earth has faced cataclysmic events before, events that nearly destroyed all life. It will happen again. Be it massive volcanic activity, gamma ray bursts from space, asteroidal direct impact, or human-caused problems of global warming or nuclear war, doom and destruction is unavoidable.

Newitz has hope, though, that possibly extinction may be avoidable even through an extinction-level event. They explore various survival strategies that have been tried and proven successful during past catastrophes: moving underground, fighting pandemics with science, transforming agriculture and architecture to meet changing realities. They also discuss possible futuristic approaches of expanding humanity beyond Earth, “terraforming” Earth to adjust the climate intentionally (reversing the unintentional changes we have made over the past century or two), even genetically or mechanically altering the human body to survive in new places or on a transformed Earth.

Reading this in the midst of the pandemic is a bit unsettling, though. The prescriptions Newitz writes require politicians and individuals to put their confidence in science. In 2013 that seemed reasonable. Now? In the U.S. we are seeing a return to that sort of expectation, but for the last four years (and still in some circles) we have seen quite the opposite. Obviously that has had devastating consequences within my own country, consequences that have reverberated around the world. Sadly, Newitz’ optimism seems a bit dated, or maybe I’m just a bit more jaded. I hope they are right and global threats and immediate danger will work to pull us together. My fear is that the opposite will happen and the very threat of catastrophe will tear us apart.

Annalee Newitz, though, is much smarter than I. They have done their research, they have spoken to scientists, they have read papers and attended conferences and put in the work. There is every reason to hope that their optimism is right and my cynicism is wrong. Scatter, Adapt, and Remember is ultimately an optimistic book. Things will happen, they will be awful, but humanity is built to survive. We could say we were made for this–we might even be able to say we will remake ourselves for this.