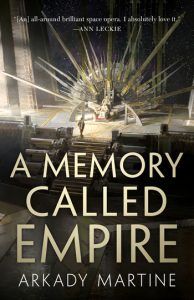 Science fiction writers come to the genre from a variety of backgrounds. Often they are science based, but perhaps more often they are not. Storytellers can learn their craft from many different teachers, and their worldbuilding can be shaped by a variety of experiences.

I am not sure just how many of them have doctorates in Byzantine history, but if A Memory Called Empire is any indication, perhaps more of them should!

Arkady Martine has built an incredible galaxy in this epic novel. Mahit Dzmare is the newly appointed ambassador from the minute space station Lsel to the sprawling Teixcalaanli Empire. Lsel has been able to maintain a tenuous independence from the hungry and acquisitive empire by providing necessary services and using adroit diplomacy. However, their long-serving ambassador has died suddenly and mysteriously and his very young and very inexperienced replacement is on her way.

What most people in Teixcalaanli do not know is that Mahit does have a secret weapon in her head. Lsel Station learned long ago that certain types of institutional knowledge were irreplaceable on a space station without an inhabitable planet anywhere close. Pilots, miners, and others could not afford to lose the wisdom of their predecessors. Lsel had come up with a way to transfer memories from one person to another through a surgically implanted device. This technology, unknown to the Empire, allowed a young woman on her first diplomatic posting access to the memories of the man who preceded her as ambassador.

Unfortunately, those memories are fifteen years out of date, as the man had not returned to Lsel in that time to download his memories. And, when she sees his dead body and learns he has been murdered, something within that memory transfer snaps and she is suddenly alone in her own head, in the capital of a foreign empire devoted to conquest, trying to navigate through local intrigue and still save her little outpost’s independence.

Just the kind of Byzantine plot that requires an expert to create!

Mahit quickly learns that her predecessor had put himself into the middle of palace intrigue, developing (umm, very) close relationships with some of the highest positioned members of the emperor’s inner circle. Close enough that some even knew of the top secret Lsel technology that allowed memories to be preserved for generations. Close enough that someone was willing and positioned to kill him. And as the local situation becomes more unstable and her home station’s position becomes more precarious, Mahit realizes that the question is not about whom she can trust.

It is which person that she can’t trust is going to kill her.

Martine’s book hardly reads like a debut novel. It is sprawling and deep, with a plot that is both intricate and intimate. Mahit Dzmare is a resourceful and courageous protagonist, thrown into a world she is unready to face without the resources she should have had available to her. Still, she has a solid core, is willing to take necessary risks, and discovers strengths that neither she nor those who sent her expected her to have. If Martine is able to create fiction with this kind of depth and insight, I suspect the Byzantine Empire comes to life in her classes. It’s probably a good thing those emperors did not have space travel at their disposal.