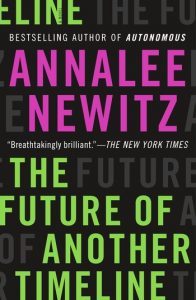 Science Fiction: The Future of Another Timeline, Annalee Newitz

What do you get when you put a distinguished science writer, a brilliant historian, a futurist, a feminist and queer advocate, and a sci fi novelist (and probably some other credentials I’ve overlooked) into the same body? It’s quite possible you get Annalee Newitz, and when they turn their attention to writing a time travel novel you may get The Future of Another Timeline.

Tess is a time traveler. Born in 1974, she grew up in the ‘90s and became a researcher of other time periods. From her base in the year 2022 she visits other times as an observer, particularly an observer of women’s movements. Most of those had failed dismally. In her timeline, abortion and contraception are illegal. There were some successes: Harriett Tubman had become a U.S. Senator in her timeline. There were many more failures.

Beth was a teenager in the early ‘90s, growing up in Irvine, CA. She struggled with unpredictable parents, loved hanging out with her friends, and enjoyed her music.

These two protagonists intersect in a number of ways. Tess and Beth were friends as kids until something happened that separated them. Although it is against the law, Tess is determined to change the timeline so that their separation doesn’t happen. Tess is also working with a subversive group known as “The Daughters of Harriett.” They are committed to changing the past to improve the rights of women, and they are focused on what we now think of as the Chicago World’s Fair to make those adjustments.

Confused yet? Oh, there’s so much more. A mysterious traveler from the far future, trips to the ancient Nabatean realm and the prehistoric Ordovician period, actual historical characters, and a bit of murder and mayhem.

In the hands of a lesser author this could have been a mess. Fortunately, we received it from the hands of Annalee Newitz. They bring these disparate pieces together brilliantly, showing multiple possible futures, following the changes in Beth and Tess as their relationship alters and matures and transforms, considering both cultural and personal ramifications of changing timelines in ways that affect both millions of lives and the trajectories of a very few individuals.

Revealed in the afterword is just how intensely personal this book is to Newitz. I won’t give anything away other than to say they include fictionalized accounts of very personal events when they were a child in Irvine in the ‘90s. Although they do not admit to being a time traveler, there are undoubtedly things they would like to change about their past.

As they point out in the book, though, changing the past is a dangerous game. It might work, tweaking things in such a way that women have greater autonomy and agency than they might otherwise have had. But it also would change you. There are things I wish had not happened to me. Things I wish I had said or done differently. Things that I regret. But all of those things make up who I am now. If I could undo them, who would I be? Would I create the better person I think I could have been? Or would I lose something precious in the redo–my wife? My children? My grandchildren? Each of us is the work of our past, and none of us knows what the untaken path might have brought. Annalee Newitz reminds us all of that.