Book Review: In the Event of Contact, Ethel Rohan 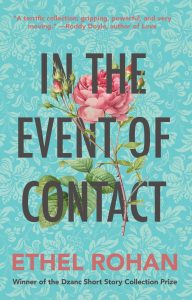 Short Story Collection: In the Event of Contact, Ethel Rohan

The short story is an underappreciated art form. When done well, it carries the emotional impact of a boxer’s sweeping left hook. Novels and even novellas take time to develop. Their impact builds and grows and there are necessarily ebbs and flows. If they are too intense, if the reader has no opportunities to take a breath, then the book becomes unreadable. Likewise, if the plot takes too long to develop, if the ebbs overwhelm the flows, the book is boring.

Short stories don’t have that luxury. Every word is valuable. Like poems, the emotional punch has to take the reader quickly. They are thunderstorms, pouring rain and hail and lightning and winds into a small area for a small time, leaving the ground soggy and tree branches broken in their wake. At least, that’s what the best ones do.

In the Event of Contact has some of the best short stories I have read in quite some time. Ethel Rohan writes of Irish people. Some are in Ireland. Some are part of the diaspora. Some have returned to Ireland for various reasons, although their homes remain elsewhere. Yet all of them carry the burdens of home with them wherever they are.

I am a little reluctant to impose a theme on the book that the author or publisher has not expressed, but all of these stories seemed to deal with severance. More than separation, more than homesickness, more than a longing to connect, these are people who have been forcibly severed from their homes, their families, their land. The titular story is of three identical triplets. One of the three has an absolute phobia for human touch, including the touch of her sisters. Even an accidental brush against her shoulder leaves her screaming on the floor. Her phobia has severed her from others–but the story is about one of the sisters and how deeply this separation affects her. One sister may be severed by her phobia, but this other sister is just as severed by her response to that phobia.

A man falls into the habits of his father, habits which took him away from his family. A woman bears a secret that would shatter her parents. A priest struggles to live his vocation as his memory betrays him. A woman cannot move beyond the loss of her childhood best friend. A boy dreams of becoming a great detective and learns something he can never unlearn. All of these stories have the pain of loss, the ache of absence, the phantom senses of an amputated limb. These painful absences, though, are part of the lived experience of most humans. Many of us have made choices that separated us, sometimes with emotional violence, from people we love. Many of us have bid farewell to our childhood homes and sought to start new lives in new places with new people. Many of us have secrets that would shatter others were they revealed. Many of us have pasts that we can hardly bear to remember and cannot dare to forget.

The power of Rohan’s writing is in her observation of the human condition. These stories are almost voyeuristic. We are watchers, focused on moments in lives that began before the story and that continue beyond the story’s end. Each of these scenes left me wanting more. What will the priest do? Can the sisters ever become whole? Will the marriage survive?

We don’t know. The characters are on a train and we glimpse them through windows as it slows down but doesn’t stop. We have vignettes, dioramas, moments in lives that change a person’s destiny–but we don’t know how or where or what will result. The fact that I keep asking those questions, though, reveals just how good these stories are.

Our thanks to author Ethel Rohan for our copy of In the Event of Contact (and the very nice letter that accompanied it) given to us with a request for a review.

Book Review: In the Event of Contact, Ethel Rohan