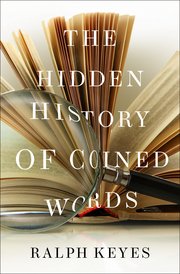 In the delightful book Frindle by the late Andrew Clements, a child decides he wants to make a word. He convinces everyone in his class, then his school, to call a pen a “frindle.” Eventually the word catches on and years later he receives a dictionary in the mail with a bookmark in the “F’s.” Sure enough, frindle has made the dictionary and received acknowledgment that it is truly a word.

Not that the journey taken by “frindle” was easy, but most coined words die long before they find a place in the dictionary. Still, every year our language is enriched (or some would argue “debased”) by the addition of new words, new meanings for old words, new phrases conveying new ideas, and new discoveries and inventions demanding some kind of description.

The Hidden History of Coined Words looks at a multiplicity of ways words enter our vocabularies. Often they are less “new” words than they are rediscovered or repurposed words: “google” is more than 100 years old although “to google” is something the original users of the world could not have imagined. Tweetie Bird cartoons were never limited to 140 or 280 letters. These are words that have taken on new life with their digital expressions.

Some people have tried to coin words and phrases, usually with very limited success. Even Shakespeare, credited by some with inventing thousands of words, was more a discoverer and conveyer of existing words than a creator of new ones. Still, there are easily thousands of words we use still because Shakespeare popularized them or repurposed them. Many of these words might have suffered the ignominious fate of many of their contemporaries and fallen into disuse, removed from dictionaries because they were no longer relevant. One wonders how much longer a “floppy disk” will require a current definition and whether it might soon join the ranks of “archaic” words.

Keyes’ book is engaging and fascinating. Battles between those who claim to have invented certain words or phrases are sometimes quite droll. And who is not up for the linguistic feud between the two countries separated by a common language, Britain and the U.S.

For those who, like me, enjoy words and history and particularly enjoy the history of words, this is a brilliant book, one that can be savored and explored.