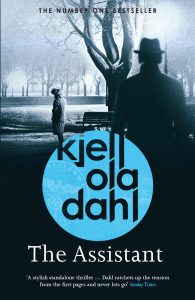 Set in Norway between the World Wars, The Assistant is a gripping and complex story that is part detective novel, part spy thriller, part historical fiction, and entirely compelling.

The main protagonist is Jack, a small-time criminal turned assistant to a private investigator. Ludvig was the policeman who caught and imprisoned Jack, and now is the investigator who employs him. The book jumps back and forth from the mid-1920s to 1938, from Jack’s days as a smuggler to the time when he and Ludvig are working together.

In the 1920s, Jack worked delivering liquor to grocery stores and restaurants. Although beer and wine were legal in Norway, there was a prohibition against distilled spirits, a prohibition that was apparently as effective in Norway as it was in the United States. After several brushes with the law, led by Ludvig, Jack strikes out on his own and buys a boat to bring in his own supply.

Complicating his life in those days was his attraction to Amalie, the maid and mistress of his employer. He loves her. She loves money. Jack does not have money. It is not a healthy relationship they share.

I don’t want to give away spoilers. Just know that German Gestapo are involved, Jack’s past becomes very present beyond just Amalie’s return, and mistrust and betrayal and misplaced affections create problems for almost all involved.

Kjell Ola Dahl is an award winning novelist. This book makes it easy to see why. Jack is absolutely riveting. Ludvig and Amalie are complex, the other characters are well crafted, and the entire plot is dark and twisty. I also want to commend the translator, who brings the story into English but keeps a very Nordic feel to the retelling.

This is a standalone novel that makes me want to read more by this author. The plot, the characters, the writing, the atmosphere, the historical picture of a Norway trying to figure out its place between Stalin and Hitler and the west–all of it makes for a book that grabs the reader and does not let them go. 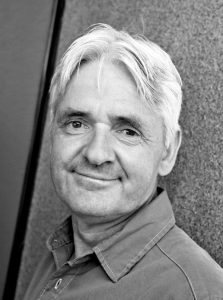 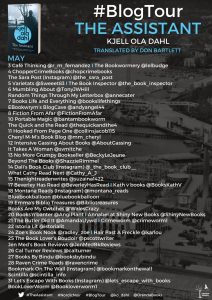 Our thanks to Anne Cater of Damp Pebbles Blog Tours for our copy of The Assistant, given in exchange for our honest review. The opinions here are solely those of Scintilla. For other perspectives on this book, check out the other bloggers participating in this tour.