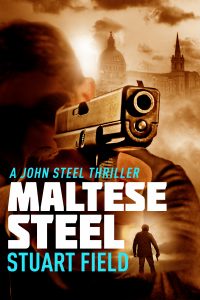 John Steel gets a phone call that none of us would want to receive. His goddaughter, a young woman in her twenties, has died in Malta. The police investigation is leaning toward ruling it a suicide, but her distraught father, a former comrade of Steel’s, does not believe the report. He asks Steel to come and look around. Steel cannot refuse his friend and leaves for Malta right away.

For a small island in the middle of the Mediterranean, Malta has a lot of action. Steel quickly learns that his friend is not the only one who was expecting him. There is a stunningly beautiful woman following him. There are also various thuggish folks following him who are not as beautiful. Whatever may have happened to his goddaughter, Steel realizes that other forces are at work on this island that have designs far beyond the life of a single individual.

However, Steel cares deeply about that individual’s life. His friend called him, he came, and neither kidnappers nor terrorists nor foreign agents nor crazed cabbies are going to keep him from finding the answers.

Stuart Field has taken the quintessential überman of thrillers and added a strong dose of caffeine. John Steel is a highly trained operative. He is a survivor of an assassination attempt that took the lives of his parents and his wife. He is a British earl, head of a business empire, a soldier, a spy, a detective, and likes to dress in black. In other books in the series his colleagues compare him to Batman, and that comparison makes a lot of sense. He blends in as much as a tall, handsome, wealthy, aristocratic, violent person can morph into a man of the people.

Hey, someone’s gotta do it.

Thriller’s often have over-the-top plots, near superhero protagonists, conspiracies that reach the highest levels of governments and corporations, terrorists ready to watch the world burn, and at least one gorgeous woman to provide the hero with a distraction. James Bond has nothing on John Steel except possibly a few gadgets and the assistance of Q. Maltese Steel may not be every reader’s cup of tea (or malt whiskey), but it is a fun and action packed thrill ride of a novel that brings in all of the anger and violence and skill and lady-charming elan and detective acumen that one British earl can carry. 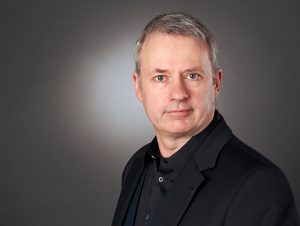 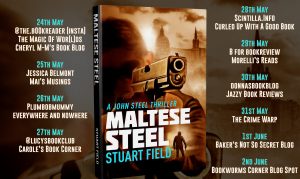 Our thanks to Rachel Gilbey of Rachel’s Random Resources Blog Tours for our copy of Maltese Steel, given in exchange for our review. The opinions here are solely those of Scintilla. For other perspectives on this book, check out the other bloggers on this tour.