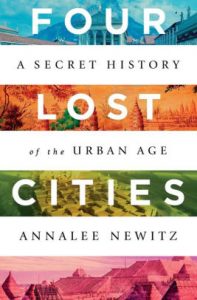 Going into this book I did not realize that the title is intentionally ironic. Annalee Newitz is very deliberate in pointing out that the cities they are writing about were never “lost.” These cities did not disappear, they did not fall (though one was indeed violently and suddenly destroyed), they did not die (again with arguably one exception). Their histories, though, may be a glimpse into our urban future, a future that could be closer than we care to admit.

Çatalhöyük. Pompeii. Angkor. Cahokia. Other than Pompeii, none of these cities warranted a mention during my high school days in the 1980s, a fact much more reflective of the values of the time than of the importance of the cities. I had some terrific teachers, but the curriculum was quite Eurocentric when it came to world history. And for years, the study of these cities was also very Eurocentric. Angkor was a nearly mythical “lost city,” “discovered” in the tropical jungle by an intrepid French explorer. Conveniently ignored were the people who were living there when he arrived, including Buddhist monks who for centuries had tended the amazing Angkor Wat temple. The area around Çatalhöyük had been inhabited for millennia and the natives were quite familiar with the fact that a great city had once stood where their plows tilled. Cahokia lies within sight of St. Louis, MO, but the thought that Native Americans might see the value of living near the confluence of two major North American rivers, let alone build a city, was simply unfathomable to the white settlers who took over the area.

None of these cities fit neatly into the narratives we (westerners) tell ourselves. Çatalhöyük was built thousands of years ago, long before “cities” were common. In many ways it was almost a proto-city, with people inventing urban dwelling as they did it. Given the length of time which has passed and the relatively few written records that survived, it is hardly surprising that theories are much more plentiful than agreement about the lives, governance, and beliefs of the people. It seems logical in retrospect, but cities were not a natural result of “civilization.” Çatalhöyük appears in many ways to have been a living experiment in urban development. People found it convenient to live near other people for perhaps a wide variety of reasons. Whatever reasons brought them into initial proximity were then reinforced by the benefits of city life: e.g. found families and affinity groups, shared resources, communal protection. Eventually, Çatalhöyük was largely abandoned. To say it “failed,” though, is a grotesque misrepresentation of reality. The city stood for roughly 1400 years, and when people left they took with them the idea of “city” as a viable plan for living. How many other “failed” experiments have changed the very fabric of the world?

Newitz gives each of their four example cities their due. Angkor was one of the largest cities in the world at its time, perhaps the largest city. Although in many ways it was the victim of political failures and disastrous urban planning, it remains a monument to civil engineering in a time before heavy equipment and power tools. Pompeii had a catastrophic end. Before Vesuvius erupted, though, it was a multicultural hub attracting immigrants from around the Mediterranean and beyond, and offering opportunities to women and slaves which were greater than we might have expected for the time. Cahokia also shows signs of having welcomed immigrants from afar. Although environmental changes may have led to the city’s population decline, its continuing influence can be seen in both the descendants of its people and the transformation of landscapes throughout the American midwest.

In a time when urbanization has become the norm, it is valuable to check out the successes and failures of those whose experiments brought us to this point. Annalee Newitz points out some of the dangers we face that echo the past: ineffective politics, poor urban planning, climate change, fragmenting civil accord. But they also offer hope. Any specific city may find its time limited. The lessons learned, however imperfectly, do inspire future generations to do things differently. Whether they are done “better” or not remains to be seen.