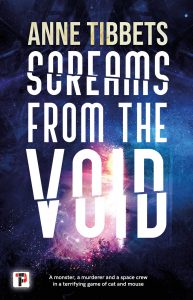 Where to start? The “Demeter” has been in space for nearly two years, gathering plant samples from distant planets to study on Earth. Ensign Reina for one is happy they are nearly done. Her boss is a jerk, her ex-boyfriend is on board and committed to making her life miserable, and she is confident that she is going to be shamed and demoted at the end of their tour.

Then, something starts crawling through the air vents and viciously killing the crew. Furry, with six legs and four eyes, claws like daggers and a hunger for human entrails, it leaves a trail of death and violence throughout the ship. Soon, only a terrified group of survivors remains for the creature to attack.

At this point, the murders begin. A monster with two legs and two eyes is also stalking the survivors.

Anne Tibbets’ Screams from the Void poses a very valid question: where are the monsters? Reina has been subjected to abuse throughout the voyage. Her ex-boyfriend was emotionally and physically and sexually violent. Her boss belittled and manipulated her. The ship’s senior staff refused to support her. She faced plenty of monsters long before the Kepler began eviscerating her shipmates.

Sci-Fi/Horror is a little like literary skydiving. Space is full of known dangers. Radiation, extreme temperatures, vacuum: the environment is clearly one we fragile humans cannot endure without encasing ourselves in shells of metal and plastic. Put people into that unforgiving setting, then add violent aliens or violent humans, or in this case add both, and you get page after page of white-knuckle adrenaline rush in even an average book.

What takes a book from being merely average to being quite good is that extra step of recognizing that humans can be monsters, too.

Throughout the book we see Reina reclaiming ownership of her own story. Yes, this is a story about monsters, both human and extraterrestrial. More than that, though, it is a story about a woman discovering how to be more than a victim. That’s a powerful story on any planet. 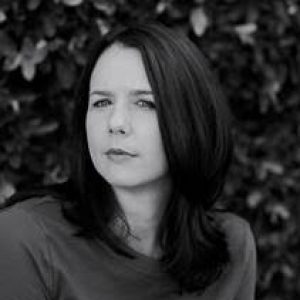 Our thanks to Anne Cater of Random Things Blog Tours and Flame Tree Press for our PHYSICAL! copy of Screams from the Void, given in exchange for our honest review. The opinions here are solely those of Scintilla. For other perspectives on this novel, check out the other bloggers on this tour.