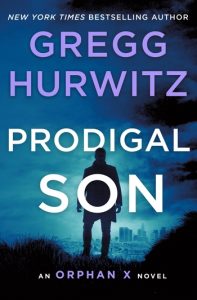 Evan Smoak, Orphan X, has been ordered to retire by the president of the United States. If he does not retire, she will have him killed. He actually wants to retire. He wants to figure out how to live a normal life, perhaps have a relationship with a normal woman, travel around without worrying about people trying to kill him or figuring out how to kill them, first.

When his “Nowhere” line rings, though, he answers. And a voice he never thought he would hear calls him by name. “Evan? This is your mother.”

Evan Smoak was not just “Orphan X.” He was an orphan. He never knew either of his parents. His mother had dropped him off with a couple when he was about one month old. He had landed in the foster care system until at the age of 12 he forced his way into the “Orphan ___” program without knowing what it was or what it did. He just knew it was his way out of the slums of Baltimore. He had looked a little into his family history but there were no records and no memories of the young woman who simply dropped him off and disappeared. The couple she left him with had died while he was still a toddler. The only thing he knew was his name, but there was no way to know whether he shared that name with either parent. This simply could not be his mother.

Still, she kept calling. And he went to investigate. She was in Buenos Aires and knew enough about his infancy and childhood that she was either his mother or an incredibly well prepared operative. All she wanted was for him to help a young man who was in trouble. A man Evan knew from his days in the foster home in Baltimore: Andre Duran.

Prodigal Son is far more than a thriller, though it is certainly that. Orphan X may be “retired,” but he has not lost his edge. Plenty of bodies get stacked up in sundry parts of California as the result of his investigation. Andre has run afoul of a secret plan by a government contractor to construct military drones that would take warfare away from the control of people with (hopefully) a conscience and put it entirely into the realm of self-learning AI.

Evan Smoak, though, is reflective throughout the book. As he learns more about this woman who claims to be his mother, he wonders what he missed by not having her. True, he would not be a world-class assassin with incredible wealth and tremendous (dare I say “killer”) talents. That is a very lonely life, though. He finds himself wrestling with his feelings toward Joey, formerly part of the Orphan program and now his teenage…well, it’s hard to say. Ward? Protege? Protectee? Partner? She is brilliant and can hack through any computer system. But she also wants to do something incredibly dangerous: date a normal boy. She has even started wearing make-up and nail polish. Smoak can slice a carotid with the same knife the assassin just stuck through his forearm, he can collapse a sexual predator’s lung with a single blow. Hormonal and angst-filled teenagers are an entirely new foe. Could he be feeling a paternal love toward this child/woman in his care?

The dynamic between Andre and Evan is incredible. Without giving away spoilers, I will just say that in many ways each of them is jealous of the other. Andre is in serious trouble. He is estranged from his wife, hiding from assassins, living in a slum, and has never really forgiven Evan for escaping from the group home. But Evan sees what Andre had and is in danger of losing: a wife, a daughter, a home, a family.

And Evan’s relationship with his ADA neighbor Mia and her son Peter is becoming more complicated. She is committed to upholding the law, which means putting ruthless killers like Evan Smoak behind bars. But Evan saved their lives, he has protected them, and he gives Peter a father figure who is strong and caring.

From twist to turn, from exploring relationships to an explosive ending, Prodigal Son has become my favorite book in what may be my favorite series. I could have put it down. I didn’t. I’m just sorry it ended and now I have to wait for the next one.