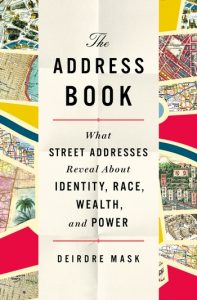 What’s in an address? Admittedly, I had never really thought about it. I know my address, the address of my office, other addresses of importance to me. Deirdre Mask, though, has thought about it a lot. Her book, The Address Book, gives us reason to think about it ourselves.

This book reminded me of an event in my own life. As a ministry student, I was invited to preach a sermon for a small rural church (probably 1987). The directions seemed clear enough: take the state highway until you see the sawmill, turn right onto (long forgotten name) Street, you can’t miss it. OK, those aren’t particularly clear directions. We got lost. Oh, so lost. Eventually we found the church by accident. We learned a) the sawmill had burned down years ago, b) the street had a different name though it was known locally by the name we had been given, c) it wouldn’t have mattered anyway because there was no street sign, and d) the church had changed names but the person still referred to it by its old name. It’s actually a wonder that we aren’t still wandering around Kentucky looking for that church.

Addresses are a surprisingly new phenomenon. In fact, there are many places that do not have addresses. When the book was being written (it was published in 2020), even areas within the United States did not have actual addresses. Mask traveled back roads in West Virginia, areas where directions like I received for my sojourn in Kentucky were typical. She visited slums in Kolkata where streets had no names, houses had no numbers, and even the definition of a “house” was open to interpretation.

Sometimes addresses themselves are unwelcome. After all, if the government has your address, they can find you. They can tax you. They can draft you. They can arrest you. If you can easily get lost in the backwoods of a rural area or in the crowded streets of a shantytown, you can avoid these official interventions. However, a lack of an address has its own challenges. Many jobs require an address for their employees. Mail delivery is difficult or even impossible without a fixed address. Public health uses addresses to track disease outbreaks.

Addresses can also be very political. In Iran, many streets were renamed after the revolution overthrew the Shah. In the American south, controversy over streets named for Confederate figures and slaveholders is growing more and more heated. And addresses can be controversial in other ways. More than one street in Britain has had the name, “Gropecunt,” a name which evokes a much more colorful past than people like to acknowledge. (Many, if not all, of these streets have new names now.) And the author tells of her reluctance as an African American to buy a house located on “Black Boy” street.

Deirdre Mask has managed to take something as ordinary (to me) as addresses and make them into an extraordinary view of our world. Through exhaustive research and no-doubt exhausting travel she shows us a world with and without addresses, one that is shaped and transformed and remembered by street names and numbers. And she explores a future where everyone might have the ability to find their address using their smartphone–though I must admit, using the app she introduces in the book was a bit unsettling when I realized that my bedroom has a different address than my living room! Still, a little more precision would have been quite welcome during that unfortunate trip through the hills of Kentucky almost 35 years ago.