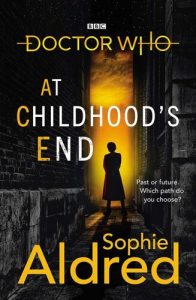 Doctor Who: At Childhood’s End is aces!

Dorothy McShane is a reclusive millionaire philanthropist with a love of fast cars and Triumph motorcycles. She also makes her business manager’s head hurt at the number of company cars that are flipped or destroyed. McShane knows secrets that the government purposely forgot. She protects the earth from extraterrestrial and non-human entities. The Government used to know UNIT (UNified Intelligence Taskforce) but because of Brexit, it and another group called Torchwood are gone.

So why does she know when so many others have forgotten? She used to travel with this strange Scottish man with a funny umbrella into the stars. Throughout time and space they traveled. She even beat up one of his most feared enemies with a baseball bat. But that was a different time. She got older and changed her name back to Dorothy but she never forgot what The Professor (as she called him) taught her. So when the TV shows a weird alien satellite appearing near the moon and she hears stories from friends about alien abductions, she has to investigate it. While investigating, she meets up with someone she is both happy and upset to see: an old friend who has now regenerated as a woman.

As you can tell by my parents’ blog, we are big into sci-fi and fantasy. Early car trips when my older brother was in charge of the in-car movie and the TV/VCR/DVD meant that I saw a lot of Star Trek: The Next Generation; watched Peter Jackson’s Lord of the Rings; as well as the original trilogy Star Wars–although I was young enough that I didn’t really appreciate them beyond the epic battle scenes.

While I can enjoy The Lord of the Rings better now that I’ve read the books, the science fiction show that is my show is Doctor Who. Maybe it’s the silliness mixed with the ideas and the history (both of the show and the time travel within the show), but to me, Doctor Who is just fun. This book was written by a Doctor Who alum who puts the same spirit of the TV show into the pages of the book.

The book gives an inside look at what it is like to be a companion of The Doctor. Imagine seeing the universe then returning to a backward world compared to the rest of it. How do you react? How do you see the world? Can you always trust the person who is showing you a universe of endless wonder? The Doctor is a complicated person and as a viewer and as a fan you don’t always remember that. They may be the protagonist but sometimes they don’t always choose the best way to solve the problem and the fallout of their choices often lands on their friends.

This a story for Doctor Who fans of the classic and modern. If you like audiobooks then Sophie Aldred does a spectacular job of bringing her voice actor talents to work narrating the book.

Also see: Resource: While You’re Waiting for the Next Doctor Who Season…