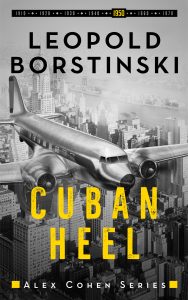 I have never really been drawn to gangland books or movies. I’ve seen the Godfather movies, more or less. Almost every American of a certain age has seen them. I’ve seen all or parts of other gangster movies, but it’s just not a genre that usually appeals to me.

The Alex Cohen series by Leopold Borstinski is a notable exception to that. Alex Cohen is ruthless, corrupt, more than willing to kill a rival or even an old friend if the decision was made to end that friend’s life. He made and lost a fortune in New York City, did time without naming names, and was rewarded later with rackets and casinos in Las Vegas. Now in the 1950s he’s been invited by his old friend and fellow Yidisher Meyer Lansky to help turn Havana into a bigger and better (and more corrupt and more lucrative) version of Vegas.

Things have begun evolving in mob circles as the old guard has died (seldom of old age) or been exiled by aggressive federal investigations. No longer are the Jewish and Italian mafia coordinating activities for mutual profit and protection. The Sicilians have turned inward and excluded their longtime banker Lansky and their longtime enforcer Cohen. Lansky is determined to carve out a spot in Havana for the Jewish mob to control and Cohen is a big part of his plans.

Cohen has also begun to mellow from the violent thug who terrorized the Bowery in his teens and twenties. That is, he doesn’t take every job (i.e. murder) he is offered. He has reunited with his former wife, Sarah, and begun to mend fences with two of his children, David and Moishe. He has even purchased the building in New York where his mother lives (without killing the landlord) and reconnected with his sister. Still, there is a cloud hanging over his life in Cuba. He has his family closer than ever, he is using violence less often than he used to, he is looking to possibly retire completely in a few years, his friend Meyer Lansky has schemes that could make them richer than their wildest dreams. What could possibly derail his nearly idyllic life?

Although I love reading history and at one time pursued an M.A. in the subject (a pursuit never fulfilled), I could not remember exactly when Castro came to power. I did remember, though, that it was in the 1950s. Not coincidentally, during the same time period as Cuban Heel is set. Borstinski does a terrific job of building up the tension gradually, until Lansky and Cohen seem to be masters of their own destiny only to watch their futures burn in the fires of Molotov cocktails and the blasts of mortar shells.

Once again the author has taken fact and fiction, historical characters (Lansky and Batista and Castro) and figments of his imagination, and brought them together in a tightly knotted plot that feels like a biography as well as a brilliant story. Alex Cohen is hardly a sympathetic figure. He is a murderer, a pimp, an extortioner, a money-launderer, a thug: a mobster. He has a code of his own: protect his family, remain loyal to his friends so long as they remain loyal to him, treat people with the respect they are due. Unless they need to die, at which point he makes that happen without remorse. Still, it’s hard to avoid pulling for the protagonist. I know he is a monster, I know the revolution is going to happen, I know he is going to kill somebody, and I am still whispering under my breath, “Look out, Alex!”

Even Darth Vader has his fans.

Our thanks to Emma Welton of Damp Pebbles Blog Tours for our copy of Cuban Heel, given exclusively for our honest review as part of the blog tour for the book. The opinions here are solely those of Scintilla. For other perspectives, check out the other bloggers on the tour.