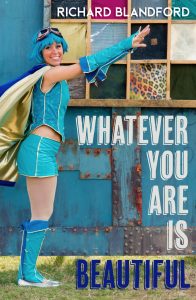 Everyone wears a mask. Everyone tells lies about themselves. Sometimes we even believe our own lies.

HEROS is a four-stage illness that has swept around the world. For some unknown reason, it impacts certain “hotspot” areas more severely than other areas. Merriweather, a small town in the northeastern US, is one of those hotspots, and a British documentary team has come to learn more about the illness and the people who have it.

The team is actually just two people. Charlie is the on-air personality. He made his mark with a kind of snide pseudo-documentary series that both spotlighted and mocked people with unusual habits or characteristics. Known for his trademark sneer, he invited his audience to laugh with him at the unusual and sometimes troubled people he met in his travels. Laura is his producer, filmographer, editor, and basically everything else that keeps the show running.

After a highly publicized trip to rehab (followed by a relapse and a return trip), Charlie is trying to rescue his career. He had done a story on people with HEROS, mocking and sneering at them in his usual manner. But he was also unexpectedly struck by the tragedy of their condition and decides that this documentary is going to be serious and sympathetic, showing the audience a different side to the condition and (hopefully) a different side to Charlie.

HEROS are people that have one or more body parts spontaneously replaced with an alternate part that is very different. They then often begin a fixation on fighting crime with their “superpower.” Not every person progresses even this far into Stage I, but those who do can still function normally in society–if society will allow them to do so. A man whose larynx falls out and is replaced with one that can emit subsonic vibrations that cause mild headaches is able to continue working. A child whose bottom teeth are replaced by huge tusks has to be homeschooled because of the reactions from classmates and teachers. And a man whose, umm, well, let’s just say that the changes between his legs give him extralegal opportunities as a male “escort.”

Subsequent phases do not happen to everyone, but when they do they can be devastating. Phase II is a type of denial stage. When they are functioning normally they insist that everything is fine. But when they are triggered (often by something small or even ordinary), they immediately don a costume and go out to face “criminals.” Later, they return to normal with no memories of this and deny that it ever happened. Phase III sees them transform almost entirely into their crime-fighting alter-egos. Phase IV is where it ends. They remain in their costumed alter-egos but part of their mind starts to understand what has happened and cannot bear it. Inevitably they commit suicide at this point.

Whatever You Are Is Beautiful is more than a new take on a superhero story. It does tell the story of transformation through the HEROS process. It also tells the story of Charlie’s transformation, from a self-centered jerk to a much more humble and compassionate person. It tells the story of how society struggles to deal with the “other,” whether that is a person with a physical difference or a person who has a mental difference. (Consider the way smart kids get bullied and you can quickly appreciate that it is the “different-ness” that matters more than the type of difference.) Although the book is filled with humorous moments and sometimes laugh out loud comments, it is really a warm and poignant book that deeply considers what it means to be human. 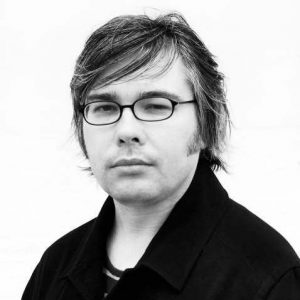 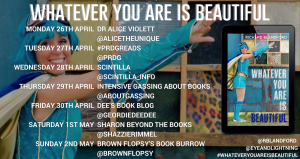 Our thanks to Emma Welton of Damp Pebbles Blog Tours for our electronic copy of Whatever You Are Is Beautiful, given in exchange for our honest review. The opinions here are those of Scintilla. For other perspectives, check out the other bloggers participating in this tour.

One thought on “Blog Tour: Whatever You Are Is Beautiful, Richard Blandford”