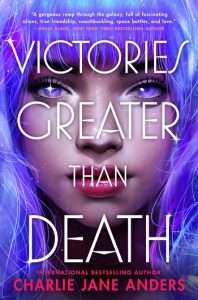 Science fiction writers are known for their vivid imaginations. Fiction alone is one thing, but imagining things that just aren’t is something entirely different. Aliens, far off stars, “impossible” technologies, incredible landscapes.

Then there is Charlie Jane Anders!

Anders’ fiction opens doors that you didn’t even know were closed. In Victories Greater than Death, Tina is a young woman who has learned she is not entirely human. Within her is a beacon that, when activated, will summon a spaceship to take her back to the life she does not remember. Her best friend Rachael knows her secret and accepts the truth. Rachael only hopes that she can go to space with her friend.

The day comes, the beacon comes to life, and the adventure starts. The problem with the beacon is that it does not only call Tina’s allies. Her enemies are also alerted, and they are quite willing to kill anyone and everyone to capture or end Tina before her memories return.

So begins an adventure that takes Tina, Rachael, and an unlikely group of young adults across the galaxy on a quest to find a missing artifact. And I don’t want to say too much that might give spoilers away, except that Anders aliens are more alien than most, her landscapes are stranger than the aliens living within them, and if this is not the start of a series then that would be a real shame.

Anders’ writing has a delightful flow, and this YA book truly sings. What is particularly compelling about all of her work is her compassion for those who are different, loners, misfits, unique. Tina is an alien who grew up as a human. Coming to terms with what and who she is brings a fascinating tension into the story. None of the human characters, and even some of the aliens, quite fit into the stories their families or their species wanted to tell. Whether their differences are gender, identity, talent, body shape, temperament, or something else that makes them “other” in the sight of their peers, Anders finds a place for them to excel as themselves in her worlds.

In many ways I was lucky as a child and young adult. I was a misfit, but still managed to find a compassionate group of friends who accepted me anyway. I often wonder if I would have chosen to live without those companions, many of whom I remain close to even decades later. There are children and young adults who do not have that group of understanding peers who embrace their oddities and cherish their uniqueness. For them, Charlie Jane Anders offers an alternate world where their differences do not make them outcasts. In her worlds, differences make people heroes.