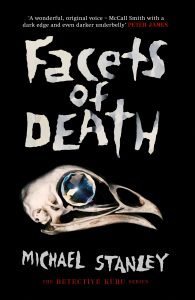 Mystery: Facets of Death, Detective Kubu Mysteries Book 7 (though chronologically this is a prequel to the series), Michael Stanley

David “Kubu” Bengu is fresh from the university and excited to start his first job. He has been appointed as a detective in the Botswana Police Force. Normally recruits had to work their way up the ranks. His scores at the university were so high, his aptitude and attitude so strong, and his mentors so impressed with him, that the police decided to hire him as a detective. That decision was not popular with his fellow officers, and he expected to have some difficulties with them.

He was not wrong, but he quickly fell into a pattern of working hard, gaining allies, and coming up with surprising investigative suggestions. This served him well in both of his first cases. Tourist’s suitcases were disappearing from airlines bound for Britain and France. As Botswana is dependent on tourism for the health of its economy, this was a serious matter for the police.

The second case was even more serious, and deadly. An armored car carrying diamonds disappeared from the road. It was later found abandoned, two of the guards murdered, and the diamonds missing. Clearly this involved some inside help from the diamond mine itself, but as the bodies pile up and the diamonds still cannot be found, the pressure on the Botswana Police mounts.

I’ll have to admit: it’s happened again. Thanks to a blog tour I have been dropped into the middle of an ongoing series and now feel compelled to read the rest of the books in the series. (Thanks a lot, Anne Cater!) Fortunately, this can indeed be read as a standalone book, as it is a prequel to the rest of the series featuring this honest and fascinating young detective. David Bengu is a large man. Very, very big. It was how he got the nickname “Kubu,” which in English means “hippo.” Raised by loving parents in a small, poor village, his scores in school were good enough to earn him scholarships and now his dream job as a detective.

I cannot say enough how much I loved this book, particularly because of the compelling characters. Kubu is kind, self-effacing, but smart. He turns opponents into allies through the strength of his character and the sharpness of his intellect. He is far from perfect, though. Sometimes his questioning of suspects is incomplete, his judgment in going into a possibly dangerous situation is foolish, and he is deservedly upbraided by his bosses for these lapses. The senior police officers, though, are also committed to solving the crimes and making a difference in their small country. There are some who simply show up for a paycheck, but most of the characters in this book are dedicated and intelligent. The plot is intricate without being confusing. The writing is sharp, all the more impressive by its co-authorship between two writers who have written the series together using a single-name.

Facets of Death is a terrific introduction to an ongoing series that I now feel I must read. Although the writers are from neighboring South Africa, they show a deep affection for the country and people of Botswana. The characters are written with love and the landscape is described with beauty. It’s very easy to see why this series has the legs to carry on through several more books. 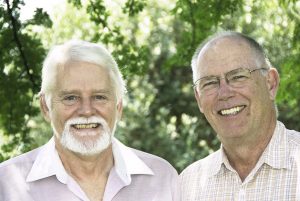 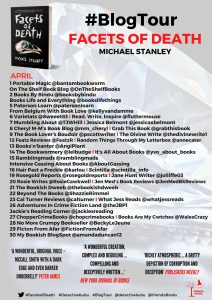 Our thanks to Anne Cater of Random Things Blog Tours for our copy of Facets of Death, given solely for our participation in this blog tour. The opinions here are solely those of Scintilla. For other perspectives on the book, check out the other bloggers participating in this tour. 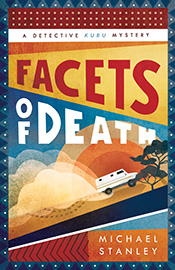