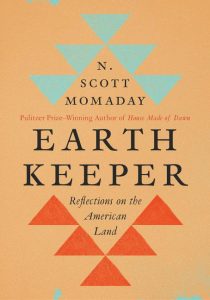 Almost 40 years ago now I sat in an Introduction to American Literature class in my high school. I don’t remember a lot about the class. I remember reading Poe and Hawthorne, Longfellow and Thoreau. Back then it was mostly white male authors in the syllabus. There were exceptions. One of those exceptions really stood out to me: N. Scott Momaday.

I am embarrassed to say I cannot remember which of his poems we read from the textbook. I do remember liking it a lot. A member of the Kiowa Nation, Momaday was already a Pulitzer Prize winner. I was only 16 or 17, a white kid in a suburban high school, but I remember his writing jolted me. I may have forgotten the poem, but I never forgot the name.

Many years later, I am in a very different place. Now a grandfather, my student days and my youthful dreams long since left behind, I barely remember that teenager who sat in the class. A few days ago I would have said that everything has changed since then. I was wrong. N. Scott Momaday still has the power to jolt me with his writing.

Earth Keeper is a short book of reflections on the relationship of people, especially his own people, to the earth. Each reflection is itself relatively short, usually a little over one page in length. I don’t think any of them fill a third page. Some of them are stories, traditional or personal. Others are almost prayers. They offer appreciations of the earth, not so much the planet (though that is there) but the soil and the landscape and the wind and the water and the life. They also lament the damage we humans have done to the earth. One reflection tells of listening one night to the sounds of dogs and coyotes, sounds that were drowned the next day by the roar of chainsaws.

Family is also part of this communion with the earth. Momaday tells a story in the first person, then closes by saying, “This happened a long time ago. I was not there. My father was there when he was a boy. He told me of it. And I was there.” Immediately I thought of the stories my own father told me, stories of his boyhood, of his military service (he never saw combat but did meet my mother during his stint in the army), even stories from my own pre-verbal childhood. Some of those stories have become my own, stories where I was not there–but after he told me, I was there with him. Intellectually I know the difference. Emotionally I still am connected.

In one wistful story, he remembers his father and grandfather describing the sounds and appearance of prairie wolves. They were long ago hunted to extinction, now howling only in memories and legends. He closes this lament by asking, “Will I tell my grandchildren, I wonder, of animals they will never see?”

Momaday writes with passion and urgency. There is music in his prose. Many times I closed my eyes and thought through the paragraph I just read, listening to it with my mind’s ear, enjoying the lilt of the thoughts as they told a story or offered a “prayer” or spoke a lament. As the author approaches 90, he has become an elder statesman of American literature. I might argue that he is more than that: a sage, a prophet, an oracle. Earth Keeper is beautiful and poignant, elegiac and graceful. Should I live another 40 years, I suspect I will still remember my encounters with this author.