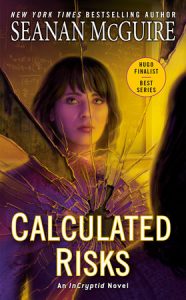 There are a number of obscure and overlooked holidays in America and the rest of the world. Somehow on January 13 I failed to properly observe National Rubber Ducky Day. I am writing this review on Dr. Seuss Day, which clearly overshadows National Banana Cream Pie Day also today, March 2. If my brother remembers National Siblings Day is April 10, it would be the first time ever. (Equally true on my part as well.) Festivities on July 6 (World Kissing Day) are likely to be subdued again this year unless COVID goes away.

One day that somehow does not get appropriate recognition is Seanan McGuire Publishes a New Novel Day. Perhaps that is because her output is so voluminous that we would need 3-5 of these days every year. One place this should-be holiday is celebrated is in the Scintilla household. A new book from Seanan McGuire warrants celebration, curling up and reading it, talking about it with each other, and generally rejoicing that something new has come from her imagination and into our home.

Calculated Risks picks up right where Imaginary Numbers left off. Sarah Zellaby managed to survive becoming a queen of the cuckoos, but during the process she and several of her cousins (Annie, Artie, and James), along with another cuckoo named Mark, are stranded in another dimension. Somehow, Iowa State University came along with them, though fortunately there were only a few students who made the trip. Oh, and Sarah removed every part of her cousins’ memories that involved her. She is now a total stranger to them, albeit a frighteningly powerful one, one that their instincts tell them to kill on sight.

I’m just going to stop there for a moment. If you have any idea what I’m talking about, you are already a fan of the InCryptid series. If you do not, well, this is a great book but you may have some catching up to do.

InCryptid are stories (both novels and short fiction) about the Price/Healy family of cryptozoologists. Except in these books, the creatures we typically relegate to fiction are mostly quite real. As are creatures we may not recognize at all, including cuckoos. Some of these creatures are often very harmful to humans. Others are quite benign. The Aeslin mice have actually developed a religion surrounding the family where every member is worshipped. It’s both delightful and disturbing, though having some of the mice in the alternate dimension may save Sarah’s life since they never forget.

Avoiding spoilers is a bit of a challenge. I will just say that the new dimension has numerous threats, some of which were brought along with them from earth. Getting home is a top priority. Staying alive is also high on the list. Returning the campus of Iowa State University back to Ames would be a good thing. And if, by chance, someone actually remembered Sarah, she would really like that. Especially if that someone is her cousin Artie.

Like the others in the series, Calculated Risks is whimsical and offbeat. McGuire’s light stuff has its dark side, and her dark stuff has humor and lightness. Be prepared for lots of twists and turns and joys and sorrows and frights and fun in this book.

And don’t forget that August 9 is National Book Lovers Day. Perhaps that’s a holiday we can all enjoy.