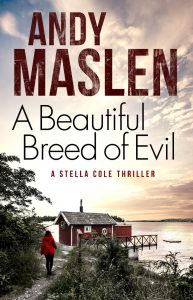 DI Stella Cole finds herself in an usual state: contentment. Her relationship with her boyfriend is nearing the point where the “L” word can be considered. Her career is going very well. The team she leads investigating difficult and high profile cases is working together with efficiency.

That state of affairs would make for a very short and boring book were it to continue. A Beautiful Breed of Evil is neither short nor boring.

The problem, of course, with wandering into a series in book five is that I now feel a compulsion to go back and read books 1-4. Enough backstory is given that this book can be read and understood without having read the other books. That’s little consolation when the skill of the author whets the appetite for more of the character and her history than the pieces required to bring the newcomers up to speed.

Cole and her team are investigating the murder of a former Swedish diplomat who had retired to London. They are called in because of a brutality inflicted on the body: the man’s tongue had been pulled from his mouth and placed on an open Bible. The very few clues left at the scene seem to point to the killer having come from the diplomat’s home country of Sweden and Cole sets out to go to Stockholm and work with police there.

Before going, though, a ghost from her past surfaces. More accurately, a skeleton. Literally. Two bodies are found in a Minnesota lake. Although both bodies have been reduced to bones by hungry fauna, matching rings are found among the remains. The rings belonged to a missing London detective and his wife, and Cole’s rival is sent to investigate. This prompts Cole to reveal some secrets from her past to her boyfriend. Unable to deal with the revelation, their relationship enters a very fraught point.

Andy Maslen does a masterful job of bringing new readers into an ongoing story while simultaneously revealing the mystery of the current novel piece by piece. Many secrets are revealed, a dark chapter in Swedish history finds current relevance, and some of Cole’s own darkness is, if not cleansed, at least given a measure of relief.

DI Stella Cole is a fascinating character, one with a passion for justice that can take her down some dark and frightening paths. I may just have to explore more of her past to put my own mind to rest, but I will definitely be watching to see what the future holds for this character. 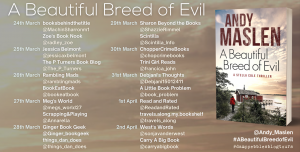 Our thanks to Emma Welton of Damp Pebbles Blog Tours for our copy of A Beautiful Breed of Evil, given as part of the blog tour promoting this book. The opinions here are solely those of Scintilla. For other perspectives, do check out the other bloggers on this tour.

One thought on “Blog Tour: A Beautiful Breed of Evil, Andy Maslen”