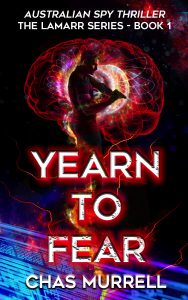 An obscure Australian government agency, CSIRO, is working on a chip that could revolutionize cell phone technology. Although the team is competent enough, it was not pulled together in a seemingly logical way. The team leader is smart, but her background does not seem adequate for the position. Her second was the technological leader of the group and probably should have been the team’s leader. He chalked the oversight up to politics and got on with the work. The third member of the team was also lacking in credentials, but he did occasionally come up with some unexpected ideas that prompted new directions in their research. Altogether, they were making some limited progress and enjoyed working together.

This is the setup for the new novel Yearn to Fear by debut author Chas Murrell. I must admit, as an American I had not given much thought to Australia’s spy agencies. As a thriller reader I have often come across books featuring the CIA, FBI, MI5, MI6, KGB/GSB, and other agencies that look to the interests of traditional world powers. Whether the differences in this book are from actual differences in the approach of ASIS, the Australian spy agency, or whether they sprung from the imagination of the authors is not a question I am able to answer. But this book did have a very different feel to it from those thrillers featuring the more well-known agencies.

In some ways it was almost personal. The main spy in the book has a friendly and working relationship with the police. Typical American thrillers (and to a lesser extent, British thrillers as well) emphasize the rivalry between agencies. Police and feds dispute over territory, over credit and blame, over who should process forensics, etc. Murrell’s spy trained with local law enforcement officers and has a pre-existing relationship with many of them (not always a good relationship, but not for reasons of being in different agencies). For most of the book, the focus seems to be on industrial espionage rather than military or political dominance. Granted, the espionage is government driven and the potential of the invention could have military outcomes, but it was still a more intimate type of story than the globe-trotting, government-changing efforts of James Bond and his ilk.

One of the things I love about blog tours is the chance to find new authors and debut novels. Yearn to Fear shows a lot of promise. I suspect that we have not heard the last from author Murrell or the CSIRO team he has created. 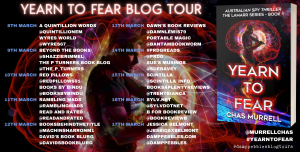 Our thanks to Emma Welton of Damp Pebbles Blog Tours for our copy of this book, given solely for participation in this blog tour. Check out the other posts on the tour for more perspectives on Yearn to Fear. The opinions here are solely those of Scintilla.