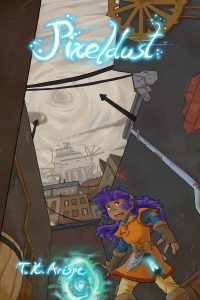 Given the anime/manga character on the cover, the relative youth of the main character, and the storyline of a videogame coming to life, one can fairly assume this is a YA book. It is, however, a YA book with some powerful themes that transcend any specific age designation.

Maria Elena had given up video games. However, trapped in an internship she hates in a city far from her Texas home, she is lonely and depressed. Her brother, Balt, was always her partner playing video games when they were younger. In an effort to help cheer up and connect with his sister, Balt convinces her to start playing the newly released Heroes of Avonell. It is a MPRPG with cutting edge technology.

OK, my gamer sons taught me that acronym: Multi Player Role Playing Game. I’m not nearly cool enough to have known it on my own.

Maria Elena, or “Quinny” as she is known in the game, is not fond of the options in Avonell so she decides to explore the virtual world on her own. During her explorations she finds a glitch in the game which takes her to an unknown world. Caed Dhraos is inhabited by monsters, goblins and orcs and minotaurs and others, who are much friendlier than the cliched “heroes” of Avonell. Accepted as an apprentice mage after saving some children from a resident evil, Quinny happily begins playing regularly in this alternate portion of the game.

What she soon discovers, though, is that these AI are alive and self aware. They may be made of pixels but they are much more than the sum of their programming. Not all the good guys are truly good, not all the bad guys are truly bad, and everyone can become something or someone of their own choosing. But Quinny’s involvement attracts unwanted attention. The programmers feel like she’s hacked their game, the players working as “heroes” think she’s with the bad guys, and the programmed people are becoming much more than that.

T.K. Arispe has written a novel with affection and heart. Gamers are the heroes of her story. In many ways a misunderstood subculture across the world, these (mostly) young adults are often regarded as slackers and antisocial misfits. WIth two sons who are avid gamers, I have had the chance to see that they are as unique and individual as any other young people. One thing they do have in common is finding a virtual community that is very important to them. Those of us older adults who eagerly check our Facebook or Twitter feeds to maintain “relationships” with people we have not seen in person for 40 years should not be so quick to judge our children and grandchildren who have made their own connections with like minded participants across the Internet.

Maria Elena and Balt are fully gamers. They are also fully Hispanic Americans. Unlike the stereotypes so common in our country, they are Americans, born and raised in Texas. Maria Elena is a college graduate. Balt is a college student. Maria Elena has landed a job in Seattle, one that is far from her Houston home and large extended family, one she has worked hard for–even if she hates it. Arispe weaves Spanglish into the conversations between the siblings. She refers to Mexican foods that are not as common or as popular outside of areas with large Hispanic populations. And she captures what I’ve seen among my own friends as being the enormous heart of Mexican Americans: the family. Fantasy and science fiction have been far to white for far too long. This book is a welcome addition for that reason as well.

Our thanks to Rachel Gilbey of Rachel’s Random Resources Blog Tours for our copy of Pixeldust, given solely for our participation in this blog tour. For other perspectives on the book, check out the other bloggers on the tour. The opinions here are solely those of Scintilla.