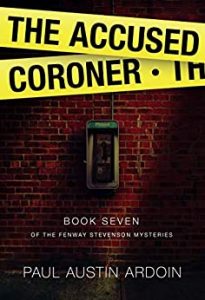 Last week county coroner Fenway Stevenson learned her mother was not the person she thought she was. Living on the run for decades, she had changed her name and hidden with her daughter in Seattle. Armed with her mother’s real name, Stevenson did some research and found she had a living grandmother. She even called and spoke with her grandmother and made plans to visit her.

Today she was visiting her, sort of. Less than a week after learning her grandmother was alive, Fenway was in Los Angeles for her grandmother’s funeral.

Before she can properly mourn or even figure out what her feelings are, let alone get to know the cousin she never knew about whom she met at the funeral, she gets an urgent call from home. Her longtime nemesis, the mayor, was murdered. In her apartment’s parking lot. The weapon was a kitchen knife, her kitchen knife, found in her apartment. And local LA police are on their way to arrest her at the church.

Fenway Stevenson has proven herself to be a tough and dogged investigator. She has put away murderers, ended a massive money-laundering scheme, and solved crimes that appeared to be impossible. But now, she is the one accused. How do you solve a murder when you are being hunted by police throughout California? She had better find out, because the police may not want to arrest her. They may want her dead.

Paul Austin Ardoin’s heroine has been through a difficult year. Her mother died, she moved to her estranged father’s home town, she was appointed coroner, she ran for and won the office in a campaign, she discovered that her mother was a stranger, she found her grandmother, she lost her grandmother, her father took a bullet for her. I’ve read that authors should throw everything at their protagonists except the kitchen sink. Frankly, that may well be coming in a future book!

Although the initial crime is back home in her relatively small coastal community, much of the action takes place in Los Angeles. Reading this brought back many memories of my time living there. Ardoin effectively uses this setting and definitely captures some of the joys and hazards of living there. Unlike many books and shows set there, The Accused Coroner acknowledges the difficulties of getting around the city. People show up late because of traffic. Riding the bus is even worse. Neighborhoods go from seedy to swanky in a matter of a block or two. Food is amazing–or awful. Some of the best restaurants are hidden behind very ordinary facades. Seemingly every apartment building has its own pool. Angelenos bundle up on those frigid days where the temperatures drop into the 50s F. On the surface, people of all races work together and shop together. However, there is still a very stark racial and ethnic divide, and some of that is still reflected in the police departments of the area.

I miss that city!

I have thoroughly enjoyed all of the Fenway Stevenson books. This latest installment has a killer plot (pun intended), takes several characters to new depths in their development and their relationships, introduces a maternal family with a checkered history, and satisfies on every level. Read this, read the series, and enjoy the ride. Even if the traffic stinks.

Our thanks to author Paul Austin Ardoin for our advance copy of the book which will be published tomorrow, March 9, 2021.