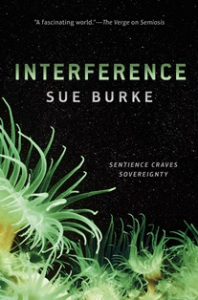 Some time ago we reviewed Semiosis by Sue Burke. She has now written a worthy sequel to that book which moved us so much.

Many years have passed on the planet Pax. The humans, Glassmakers, and Svetland all live together in reasonable harmony. There are occasional problems, but communication and good will prevail. They continue to battle together against a hostile environment. Of particular concern are the land corals growing on the edge of the forest. The land corals are poisonous to all three of the intelligent peoples of Pax.

If you have read the first book, you will recognize the three populations of Pax. (If you haven’t, stop, go, and read it now. We’ll wait here for you.) Humans fled the wars and tyranny and degradation of Earth to create a new home on the planet. Glassmakers were also from another planet, though their origins had long been forgotten after their civilization collapsed. Svetland was native to Pax. An intelligent plant similar in appearance to bamboo, Svetland had lived for centuries and was likely to continue living for centuries. Svetland depended on the humans and the Glassmakers (which somewhat resembled insects, though calling them by that name was considered rude and offensive) since its movements were quite restricted, but age and intelligence did give it multiple advantages in dealing with others.

Big change is coming to Pax. A ship has appeared in the sky, bringing explorers from Earth. The corals have become more aggressive and are threatening the fragile ecosystem of the three intelligent groups. And divisions between the humans and between humans and Glassmakers are beginning to deepen and relationships are fracturing. What’s a bamboo to do?

Like Semiosis, Interference shifts the story between perspectives. One chapter will be from an explorer. Another from a human resident of Pax. Then a Glassmaker. Then Svetland. Sometimes years pass between chapters, and other times one picks up essentially where the last one stopped. None of the characters or the beings knows everything about the others. Svetland understands more than most, but even Svetland is hampered by the limitations that are part of the nature of plants.

Semiosis is one of the best books I have read since we started Scintilla. Interference did not disappoint, though I think I was more prepared for Sue Burke’s fascinating writing style and storytelling. Semiosis was a revelation; Interference was a continuation. A deeply thoughtful and intriguing book, the two deserve to be read and appreciated together. Don’t miss this writer!