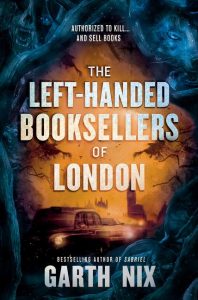 The year is 1983. Duran Duran and Michael Jackson rule the airwaves. Landlines and payphones are the only ways to communicate over distance. Margaret Thatcher and Ronald Reagan are in office. And Susan has come to London to attend art school and hopefully to also find her father.

Which she will do once she flees the house where she was staying. Running alongside the young man who just killed her host. After they escape the supernatural creatures that are pursuing them. Assuming they can survive the plots of enemies and the betrayal of friends who are committed to preventing Susan from learning the truth about her father and about herself.

Garth Nix has given us an alternate history where the balance of power between humans and the supernatural realms is maintained by booksellers. Admittedly, for a fantasy-loving bibliophile, this is almost a dream come true. Inspired by a chance encounter the author had in a London bookshop where the entire staff was left-handed, Nix has spun this into a magical thriller where a special cadre of people uses magic to fight supernatural creatures, protect humans from becoming enthralled by otherworldly beings, and keep the natural world safe from harm. Oh, and they also sell books. In fact, some of them are quite willing to let the world be overrun rather than be interrupted from cataloging rare books they have acquired. It is a balancing act: do we need to fight immediately or do we have time to repair the spine on this poor mistreated tome? Priorities are not always easy to sort.

I mean, evil celestial beings will always be there, but how often do first-edition folios of Shakespeare come along?

There are right-handed booksellers as well, and they also play an important role in this cosmic battle, but it is the left-handed booksellers who generally wield the swords and attack the enemy. Merlin, the young man who starts Susan along on her adventure, is left-handed. His sister Vivien is right-handed. Together they work to protect Susan and help her find her father, escape and fight enemies, and keep London safe for humans.

It’s important work. So important that Merlin needs to bring a book with him. Which sounds like the kind of battle I could get behind.

The Left-handed Booksellers of London is both dark and funny. Whimsical in its humor, sometimes intense in its action, full of twists and turns, Nix has given us some serious escapism that is very welcome. Both of us at Scintilla loved this book, enough that we have recommended it to family members. Hopefully, though, they stick to the book and do not feel compelled to pick up an ancient sword.

At least not until they get a job in a bookstore.