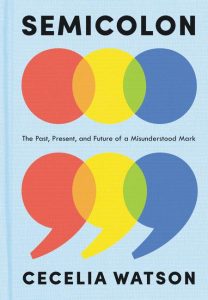 At Scintilla we get book recommendations from a variety of sources: book blog tours often invite our participation; “best of” lists and award winners grab our attention; our local library, Schlow, makes some outstanding suggestions; friends and family point us toward books they’ve enjoyed.

Our 24-year-old son finding a YouTube video citing a small book on the use of an often misunderstood and neglected punctuation mark is definitely a first.

Semicolon is a godsend to language nerds. It deserves recognition from a larger audience as well. Cecelia Watson is a historian and philosopher of science, and a teacher of writing and the humanities. These disparate if not unrelated areas of expertise come together beautifully in this book. Watson looks at the history of the punctuation mark itself, created in 1494 in Venice and quickly spreading throughout Europe into other languages. She examines the way its use (and disuse) has changed over time. She explores its impact in law and literature. And she makes a compelling case that it can be an effective tool in communication; however, it can also be an effective tool to self-identify snobs and pedants.

Yes, I am intentionally using more semicolons in this review than I typically do. It seems rude not to.

Did you know that drinking laws in Massachusetts once turned on the question of the presence or absence of a semicolon? Or that a man was actually executed after a sentence (of both the legal and written type) that hinged on a semicolon? Writers as illustrious as Herman Melville and as profound as Dr. Martin Luther King, Jr., used semicolons to great effect. And 19th Century grammarians felt empowered to criticize authors like Shakespeare and Milton for their use, misuse, abuse, and/or neglect of the semicolon (among other perceived “errors” of style and substance).

Watson writes with humor and humility. She does not try to lay down any type of formal rule or law regarding the use of the semicolon; she does not believe it is the property of the elite; she does not insist on any frozen and fixed policy about its use or value. Rather, she focuses on its purpose and use in adding clarity and even music to prose.

History buffs and language nerds will appreciate the overview of the development of language as illustrated by the oft-overlooked semicolon. (And fans of other punctuation are not ignored, although they are sometimes relegated to the footnotes. I laughed aloud at Watson’s observation that one grammarian suggested renaming the exclamation point the “eroteme,” since it was the punctuation of passion!) Watson’s writing, though, is accessible and her research fascinating. People with interest in culture, law, society, and writing will also enjoy this book. Semicolons may be misunderstood and despised; they may elicit strong opinions from grammarians; certain authors, like Mark Twain, may even suggest that those who correct their punctuation should be “shot” without the grace of giving those proofreaders time to pray. In the hands of author and scholar Cecelia Watson, though, Semicolon is a window into our fascinating world.