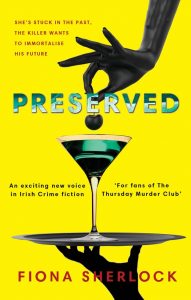 January Quail has been her newspaper’s features editor for a while. Too long, in fact. Her career has basically stalled, writing stories about antiques and oddities, articles about interesting people who were not otherwise newsworthy. Time, perhaps life, are passing her by. She favors old fashioned fashions, she barely knows how to use a computer or her smartphone, and as her paper moves more and more online her job is on the line as well. She could use a break.

Years earlier she had covered the discovery of a “bog body,” a body from ancient times preserved by the unique chemistry of Ireland’s peat bogs. When another one is discovered, Quail is sent to cover the story. Only, this body is not ancient. It is a young woman who has been dead for roughly twenty years. Suddenly this is no longer a feature story about a historical find but a murder mystery–and it may just be the break January Quail needs to advance her career.

Assuming she can survive long enough to tell the tale. The murder may have taken place in the past, but the killer is very much in the present. And the stakes begin to get much higher than her career aspirations.

Fiona Sherlock has given us a contemporary Irish murder mystery that feels as rich as the culture and community that inspired it. January Quail is fascinating. Quirky fashionista and technological Luddite only begin to describe the complexities of this character. She is from a Protestant family in a strongly Catholic community; she remembers when her father was a target for the IRA. She carries deep wounds from childhood griefs, wounds she keeps anesthetized with copious doses of alcohol. She is very well respected for her writing, but consistently sabotages her own career. And her love life…well, she really doesn’t have one.

Sherlock uses the richness of the Irish setting very effectively as well. We can almost smell the rot of the peat bogs, the smoke from seemingly ubiquitous cigarettes, the sweat of laborers and detectives and partygoers, the mist in the morning and the fog in the evening. The smog of Dublin and the fresh country air. The wealth of manor houses and the meanness of farmers’ cottages. Sherlock doesn’t describe places. She welcomes you into them, allowing her imagery to envelope the reader and bring the scenes to life. Absolutely beautifully written.

With a twisty-turny plot that is very unpredictable; enough red herrings to wreck a seafood market; and a thrilling, nail-biting conclusion, Preserved has everything a mystery reader is looking for. Combine that with the music of Sherlock’s writing, the uniqueness of her protagonist, the power of the setting and the evocative descriptions in the text, and you have what may be the perfect mystery novel.

Our thanks to Rachel Gilbey of Rachel’s Random Resources Blog Tours for our copy of the book in exchange for our participation in this tour. For other perspectives on this book, check out the other bloggers participating in the tour. The opinions here are solely those of Scintilla.