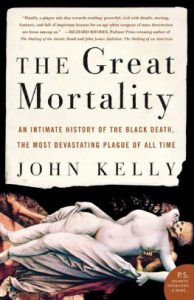 I have to admit, reading books about pandemics seems very odd in the present moment (the end of 2020). On the one hand, trying to understand the transformations society faces in the aftermath of COVID-19 is hard. Perhaps seeing how previous diseases transformed their societies might offer some insight. On the other hand, do I really want to think about past events of societal upheaval prompted by disease when I am living through elements of it today? Maybe the better mental health approach would be to avoid all references to plagues, diseases, pandemics, etc. and start reviewing cartoon collections.

Be that as it may, I dove headlong into several non-fiction books about plagues and pandemics and the resultant social upheavals, beginning with The Great Mortality by John Kelly. Published in 2005, Kelly’s book is a fascinating study of the devastation wrought in Europe by the Black Death of the 14th Century. Using both firsthand sources of victims and survivors and later research of both the Black Death and subsequent plagues (and other catastrophes), Kelly paints a vivid picture of a world turned upside down by a disease that no one could explain or understand or effectively treat or prevent.

Bubonic plague has long been blamed as the disease known today as the Black Death, but the symptoms of the disease today do not neatly align with the symptoms or the virulence described by the records of the 1340s and ‘50s. More likely is a severe variant of bubonic plague known as pneumonic plague. Although the symptoms we see in this disease today do not perfectly replicate the descriptions of the day, they are much closer and do explain both the high death tolls and the quick spread through Europe. Bubonic plague is usually spread by rat fleas which jump to humans as a last resort when other rats are unavailable. Pneumonic plague can be spread by both human fleas and directly from person to person through airborne droplets–just as a certain virus of more recent note is spread. Pneumonic plague is sometimes a result of bubonic plague changing within a person’s body, but the source for the Black Death actually seems to have been marmots. Environmental changes forced steppe marmots out of their usual habitats and into an area frequently transited as part of the Silk Road linking east to west. Coupled with military movements and the subsequent flight of refugees, the disease was carried from the Caspian Sea down to Constantinople (now Istanbul, Turkey), then into the Mediterranean and multiple ports in Greece and Italy.

Kelly does a masterful job of setting the stage into which the plague entered. Much of Europe was already hurting from a variety of environmental disasters. Earthquakes had devastated many communities in southern Europe. Terrible weather presaging the advent of the “mini ice age” had created famine conditions in much of the continent. The Crusades had increased travel throughout Europe and from Europe to the Middle East–but having armed and violent men crossing the continent wreaked havoc locally before sending the havoc eastward. The papacy was corrupt and carnal, and during this period it had actually moved the Holy See from Rome to Avignon–a small inland town in France where the French king wielded great influence over the Holy Fathers. Social upheaval, environmental disasters, food shortages, and poor leadership with no multilateral coordination proved to be very fertile soil for the new disease.

There is no way to know exactly how many died. Most estimates are that at least 30% of Europe’s population fell victim to the plague. Fifty percent seems more likely. In some places it was clearly higher: 60%, 70%, or even more. Entire families gone. Towns erased from history. One town was found some years later with only a single survivor, a young girl who was so feral that they called her “Rype,” which was their word for “Wild Bird.” No part of Europe was left untouched; even the very few areas which escaped the worst of the death toll did not survive intact.

Notably, many other deaths were not from the plague but from the fear of the plague. Lepers were rumored to be sources of the plague and they were either exiled or, more commonly, executed. But as happened so often in Europe throughout history, the Jews were particularly singled out for harsh treatment and blame. Entire communities fell victim to pogroms. A favorite means of execution was to gather all of the Jews from a particular city into a single building. Men, women, children were all forced into the building which was then set afire. Many areas were completely depopulated of Jews for centuries. A very few leaders offered asylum and protection, but most of Europe was swept up in the anti-Semitism and used the opportunity of the plague to rid themselves of these communities–and not coincidentally, appropriate the wealth they left behind.

With the benefit of historical hindsight we can see that the plague did leave some lasting effects that ultimately became positive outcomes. In many ways it marked the beginning of the end of the Medieval period. Scientific advancement began to take place. Universities were founded and expanded. Agriculture and commerce were transformed to become more effective and efficient. But, oh, the cost of those benefits was counted in the millions of lost lives. It is hard to be sanguine about that, even nearly 800 years later.

Kelly is a good writer and the book is well researched and documented. At times it reads less like a history and more like a novel. If you, like me, are interested in seeing just what a pandemic can do to the world, this is a good overview of how the most devastating pandemic of recorded history changed the earth.