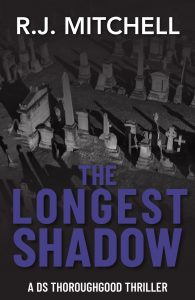 Ah, Scotland. A place where a priest can get a pint from a pub, climb the steps to a landmark, and attempt to murder a cop. DS Thoroughgood just can’t enjoy his time off!

So begins the next installment of an exciting series for mystery/thriller readers. The Longest Shadow features two separate cases, both involving a similar trigger.

DS Angus “Gus” Thoroughgood and his partner, DC Kenny Hardie, are given what seems to be a quiet and boring case compared to the hunts for gangsters and terrorists they have recently completed. A group is stealing meat from butchers. So far there has been little violence and no murders. Just meat, lots of meat, disappearing from butchers.

Unfortunately, just as they begin their inquiries, the thieves chart a new course. A young couple who own a store featuring wild game meat is attacked in their home adjacent to their shop. The husband is brutally killed. One of the gang members also lies dead at the scene. And the wife is missing. Thoroughgood and Hardy’s quiet series of non-violent thefts has taken a brutal turn, and they are suddenly pursuing an unknown criminal with a very darker agenda than robbery.

Meanwhile, in a nearby community, a long-established distillery is being bought out by Chinese Triads. This may be bad enough by itself, but it is made worse when the managing partner of the distillery is shot at. This is not his case, but DS Thoroughgood’s girlfriend is friends with the family. Despite his unwillingness (and the violations of police protocol), he is reluctantly pulled into the investigation.

Author R.J. Mitchell likes to take certain questions and chew on them slowly, savoring the flavors released through contemplation. I fear giving away spoilers, so let me just say that The Longest Shadow relates to one of the seven deadly sins and the impact it has on people even decades later. Although the two cases are not directly related to each other, by the end there is a unifying theme that gives DS Thoroughgood much food for thought. Regardless of the reader’s personal theology (or lack thereof), there are wounds people can do to each other that may never heal. When those wounds fester, the infection can spread and damage the lives of others who are completely innocent.

Often, “action packed” and “intelligently thoughtful” are incompatible descriptions of a thriller. When R.J. Mitchell is the author, the two descriptions can be safely juxtaposed. DS Thoroughgood novels are complex and sometimes philosophical, but they are also heart-pounding and filled with dizzying and often violent twists. They are books that satisfy both your mind and your need for an adrenaline rush. 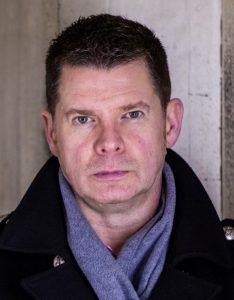 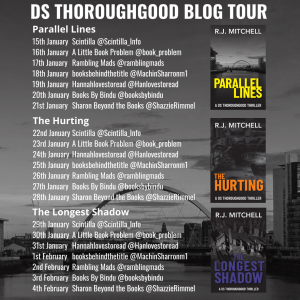 Our thanks to Emma Welton of Damp Pebbles Blog Tours for our copy of this novel, given in exchange for our participation in the blog tour. For other perspectives, check out the other bloggers on the tour. The opinions here are solely those of Scintilla.

One thought on “Blog Tour: The Longest Shadow, R.J. Mitchell”