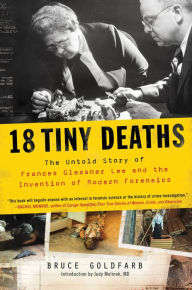 Although it would make a great title for a crime novel, 18 Tiny Deaths is actually the true story of one remarkable life. Subtitled, “The Untold Story of Frances Glessner Lee and the Invention of Modern Forensics,” it is largely a biography of Lee and her profound influence on the development of modern forensics in the United States.

Frances Glessner was born to wealth in Chicago. Educated by tutors at home, she grew up in privilege as part of Chicago’s elite. She never went to school, either public or private. She never went to college. She was expected to take her place in society as a wife, mother, and patron of the arts. This was indeed the path she started on. Married young, she had three children. However, she was apparently a difficult and exacting personality. Eventually she insisted her husband leave the house, and despite the scandal associated with divorce in the early part of 20th century America, they did indeed divorce. She never remarried though as the times demanded she kept her ex-husband’s last name.

Large portions of her childhood were spent in the family’s summer home in New England. Eventually, once her children were raised, Lee relocated to that house where she lived for the rest of her life. Not far from Boston, it afforded her access to a university she held great fondness for despite never being permitted to attend: Harvard. Women were not admitted to Harvard until much later. Her brother and ex-husband had both attended the school, though, and she held it in high regard.

One year, Lee spent a good portion of time hospitalized and convalescing after an unknown health concern. An old friend of her brother’s and of hers was hospitalized at the same time. Dr. George Magrath. Magrath was a medical examiner in Boston, one of the very few in the United States. A gifted storyteller, though extremely careful never to reveal any details of active cases, he and Lee spent hours talking about his work and the need for “Legal Medicine” as a corollary to police work. In those conversations, Lee came up with a plan that would focus the rest of her life.

Tireless in pursuing what she wanted, forceful and persuasive in sharing her goals, equipped with the financial means to get things accomplished, Lee set out to create the first school of Legal Medicine in the United States. This would obviously be located at Harvard. There were significant obstacles, none of which dissuaded her. Although “legal medicine” (now known as forensic pathology) was taught in Europe, it was largely ignored or disdained by American physicians. Medicine should be focused on the living. Furthermore, there were few resources available, few potential teachers to be found, and no money for the project.

Lee almost singlehandedly addressed all of those concerns. She won the support of both the dean of Harvard’s school of medicine and the president of the university through her charm, persuasiveness, and open checkbook! She insisted that her old friend George Magrath, who was already a part-time instructor for the school of medicine and himself a Harvard graduate, become the first professor. She secretly paid his salary from her own pocket, and also provided him with an account to cover personal expenses–which unfortunately for his longevity included copious amounts of alcohol. She collected books from around the United States and Europe, paying for translations when no English versions were available. All of these books were then donated to form the foundation of the George Magrath library.

While Magrath remained the only professor (and he was never able to be more than part-time), the program was merely an adjunct to the medical school. After Magrath had to retire for health reasons, Dr. Alan Moritz was chosen to lead the formation of a fully developed new department within the medical school. Since he was not himself trained in forensics, he spent two years studying in Europe with schools around the continent (and even going to Cairo, Egypt) in preparation for the role. The trip was, of course, paid for by Lee.

Lee’s vision went far beyond one department in one university. She intended to transform police work around the U.S. She lobbied for changes requiring medical examiners to be independent, non-political positions to state legislatures, governors, even J. Edgar Hoover. She sponsored annual workshops at Harvard for state troopers, and oversaw the creation of miniature dioramas of suspicious deaths so the troopers could get a bird’s eye view of actual death scenes without hoping(?) for a convenient murder to take place during the workshop. Much of the detail work was done by her own hand, even including things that no human would ever see but in her mind made the dioramas more real. (Many of these things were discovered when the dioramas were refurbished in recent years by art restorers from the Smithsonian).

Lee’s passion, tenacity, energy, and wealth accomplished a great deal. Harvard graduates from the program went on to become medical examiners themselves or establish similar programs at other universities. State troopers who attended her week-long workshops lobbied to have medical examiners appointed and employed in their own jurisdictions. Some states and many cities did indeed follow her advice–sometimes years after her death–in creating independent and non-political offices for medical examiners. And her NUTSHELL dioramas are still used to train police officers, troopers, and others to examine crime scenes.

Despite her best efforts, though, not everything has gone as she would have liked. Harvard eventually disbanded the Legal Medicine department and her books were incorporated into the larger medical school library. Most states still rely on the old system of elected or appointed coroners who often do not need any kind of medical or forensic training. Despite the popularity of CSI and similar shows, in reality many deaths are not examined by doctors at the location of death which can lead to missed clues. Lee’s work remains undone almost 40 years after her death.

Author Bruce Goldfarb writes with an insider’s intimacy. He works regularly with Lee’s Nutshell dioramas in his job with the Maryland Medical Examiner’s Office (the dioramas were moved to Johns Hopkins after Lee’s death, when Harvard decided to stop sponsoring the workshops for police officers). He met with members of Lee’s family, spoke with living persons who knew her, and had access to journals and records of Lee herself, her family members, Magrath, and many others who figure in Lee’s story. His book is extraordinarily well researched yet also feels very warm and personal. He does not shy away from some of the pricklier aspects of her personality. She could be tough and demanding, was certainly not the ideal spouse, and quite willing to use her wealth to manipulate others into doing her bidding. Magrath was an alcoholic whose addiction contributed greatly to an early death. But despite–or in Lee’s case, maybe because–of those personal issues, the two of them moved America significantly forward in the investigation of questionable deaths, and Goldfarb does full justice to their story.