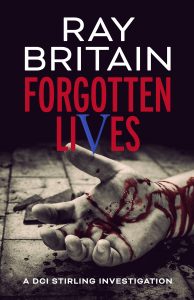 Doug Stirling was supposed to have the weekend off to spend time with his girlfriend. Unfortunately, a murderer had other plans and the detective was called to the scene. A local thug had been killed, expertly knifed in the heart, in the doorway of his own house. In a scene with very few clues one stood out: a metal “V” had been left.

A decomposing body on a boat. A cop surrounded by pornography of young girls. Bodies keep coming, each with the mysterious “V” accompanying them. But what tied these victims together? What connected the murders? Who was the killer, and what did the “V” stand for?

Forgotten Lives is a chilling and powerful novel. On one level it is a police procedural, with the usual red herrings and unexpected reveals we expect from the well-executed versions of these stories. Stirling and his team sift through clues, get unexpected leads from around the country and beyond, find a trail of bodies leading back to London and then to Marseilles, and piece by piece put together a case against a ruthless killer.

Ray Britain does not leave it at that level, though. He delves into the personal lives of the detectives who are giving up their own lives to save others. Two of the detectives are having problems at home; one of them is called away for a time to deal with a family matter. Personal ambitions and professional rivalries occasionally challenge the working environment of the team.

And Stirling himself is a deeply wounded man. Still suffering nightmares from his previous case, unwilling to let even his girlfriend know the secrets behind a locked door in his home, he has become an expert at compartmentalizing his emotions. Stirling is a great detective and an excellent leader. He is not such a terrific boyfriend, unable to allow any intimacy to make him vulnerable. Perhaps this personal weakness gives focus and intensity to his professional strengths. It also leaves him very much alone at times when he could really use some support.

Forgotten Lives has a complexity that eludes many mystery novels. It asks important questions about justice versus vengeance, about whether victimizers can truly be victims, about vigilantes and police. If the legal system is failing and forgetting people, is it right to defend and avenge these forgotten people outside the law? If that is your plan, you had better hope that Doug Stirling is not on your trail.

Our thanks to Emma Welton of Damp Pebbles Blog Tours who gave us our copy of this book in exchange for our participation on this tour. For other perspectives on this novel, check out the other bloggers on the tour. The opinions here are solely those of Scintilla.