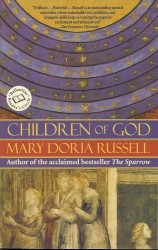 In her first book, The Sparrow, Mary Doria Russell tells the story of a tragically doomed mission to Rahkat, a planet in the Alpha Centauri system with not one but two intelligent species coexisting in a very unequal relationship with one species serving as laborers, domestic help, sexual slaves, and even food for the other species. The Jesuit mission of science and exploration wanders into the midst of this culture unaware of the nuances and the results lead to death, disfigurement, and eventually the return to earth of the disgraced survivor of the mission, Emilio Sanchez, S.J.

Much has changed on earth since his departure. Though he has aged only a few years thanks to the time dilution from relativity and near light speed travel, decades have passed on Earth. The Jesuits have fallen from favor and have lost most of their money and power. No longer are they among the leaders of the Catholic church. Instead, they are marginalized and rejected by Rome. They do still have some influence in the world, though, enough to successfully organize a follow-up mission to Rakhat. Four priests are prepared to travel.

Emilio Sanchez is not one of them.

Sanchez was brutalized on Rakhat, his body and spirit destroyed. Finally, he is beginning to find some peace. He has left the priesthood, left the Jesuits, left the faith. He has fallen in love and plans to marry. He is willing to train the priests going to Rakhat, but there is no way he will ever leave his lover and her daughter, and no way he will ever return to the site of his debasement.

At least, no way he would go voluntarily.

I am trying desperately to avoid spoilers, though the thought occurs that with a book published in 1998 I may be overthinking the effort. Still, I will try. Much of what seemed to be true at the end of the previous book is discovered to be, if not false, at least incompletely understood in Children of God. Some things remain constant through both novels, though. First, the characters are vivid, striking, and powerful. One character, an autistic savant, moved me deeply. None of them are simple or easy to like or hate. Villains on Rakhat are completely unaware that their deeds are the subject of judgment by human standards. They are acting according to their own culture and mores–never imagining that the things they do might be abhorrent to the aliens who have arrived on their planet. And frankly, for the most part they wouldn’t care if they did know. Many of the humans behave despicably as well, but again they are acting according to their beliefs and interests. Understanding those motives at least puts the detestable into a context. It does not exonerate them! It does, though, explain why someone might do something that even they would condemn as being vile.

That, really, is the power of Mary Doria Russell’s writing. Her characters can quote Milton and Nietzsche and the Bible and the Talmud. They argue moral philosophy and political expediency and eternal versus temporal concerns. They wrestle with sin and forgiveness, with mental illness and physical fatigue. They become friends and enemies, brothers and sisters across species and transcending space, rivals and allies.

I’ve heard it said that the love of God can be as terrifying as the wrath of God. The Bible says that “whom God loves, he chastises.” Is Emilio Sandoz loved by God or hated by God–if there is a God at all? Can his pain and mistakes be redeemed in any meaningful way? Was there a higher purpose to either mission to Rakhat, or were clever apes playing with forces far beyond their comprehension? Russell refuses pat or easy answers to the many questions she raises. Children of God does not resolve everything. It does provide a very thought provoking and worthy sequel to her powerful debut novel.