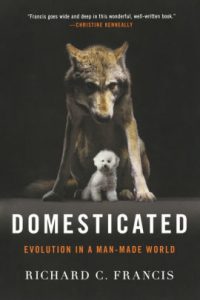 Domesticated is a scientific examination of the evolution of domesticated mammals. Tracing their origins back to their wild ancestors, Richard C. Francis explores the changes and modifications that domestication has made on nature’s original blueprint. What emerges is an exciting look at both the creativity and conservatism of evolution. More on that later.

First, Francis starts with possibly the newest domesticated animal: the fox. For decades, farm-raised foxes have been kept for the purpose of making coats from their fur. (Not a practice I approve of at all!) A Russian scientist took a small number of farmed foxes and selected the tamest ones among them. Those foxes were bred to each other, then the tamest of their offspring were bred, and so on. Only those in the tamest 10% were allowed to breed with each other. After 40 generations, the resulting foxes were so tame they could be sold as pets.

More surprising were the physical modifications in these domesticated foxes. Wild foxes have some fur coloration variety, but usually within a narrow range. Domestic foxes have much more variety in their fur color than their wild ancestors. Domestic foxes also have shorter snouts and longer, floppy ears. Their tails also curve up, similar to those of many dog breeds. In short, while the domestic foxes are still recognizably “foxy,” they share many of the characteristics of their canine cousins who preceded them into our homes and hearths.

Wild wolves are still found in the world, though in very reduced numbers after centuries of human enmity. Looking at a wild wolf compared to, say, a Chihuahua, it is hard to fathom that they are nearly genetically identical. Dogs can be larger than wolves or as small as a newborn wolf puppy. Usually their fur is shorter, except when it is longer. Their snouts typically are shorter, some so short that the poor dogs are subject to breathing problems. But some dogs have noticeably longer snouts than wolves. Yet genetically a dog is a dog is a dog, and a dog is almost a wolf. In fact, one of the threats to the wild wolf population is interbreeding with domestic dogs, creating a wolf-dog hybrid that is diluting the genetics of the species. Dogs may be the prime examples of the creativity of evolution, taking a fairly standard “wolf” template and giving us Jack Russell Terriers and Great Danes and Golden Retrievers and Toy Poodles and Mastiffs. Or in my family, a Lhasa Apso/Cavalier King Charles Spaniel mix we call Pixel.

The conservatism of evolution can be seen in the similar physical traits exhibited by diverse species as they become domesticated. Usually domesticated animals become smaller (until they are specially bred for size and become larger than their wild predecessors). Most dogs are smaller than wolves, most cats are smaller than their wildcat ancestors, cattle are smaller than aurochs, etc. There are exceptions, but in general size reduces. Color variations increase–rather than natural selection favoring a camouflaging coat, human tastes run toward a more eclectic palette. Other hair and fur changes also occur, again showing similar changes in diverse species. Some of this is in the activation of genes tied to tameness, some of it is in the delayed maturation of species no longer fearing predators per se (not counting the humans who will someday eat them), and some of it is simply reusing the basic mammalian genetic blueprint. (To my disappointment the book only dealt with domesticated mammals and not chickens, geese, pigeons, and other birds among the other species we have domesticated.)

Despite my disappointment in only dealing with mammals, a focus likely driven by the desire to keep the book under 500 pages, I loved both the depth the author gave to his subject and the way he explained complicated scientific principles in a way this non-scientist could (almost) understand. This is not a book for people afraid of a challenge. It should not frighten those who are up to challenging themselves, though. Francis makes the subject approachable without dumbing it down. All in all it is a fascinating book, one that made me newly appreciate the tame lupine descendant that serves as a fluffy throw pillow on our couch.