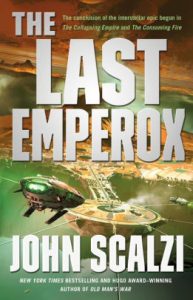 In the first two books of his Interdependency trilogy, John Scalzi has introduced readers to the empire and its reliance on “the flow,” the poorly understood force that transports ships across vast distances of space from one star to another. The empire was specifically formed to require “interdependence.” No one system could break away from the others because each system had something that no other star system could supply but all of them required. This had worked reasonably well for 1500 years.

Now, though, the Interdependency is threatened by the collapse of the flow. Travel between systems will soon end. Emperox Grayland II is determined to save her people, all of her people, if she can avoid being assassinated long enough to accomplish it.

On her side is her boyfriend, the mathematician Marce who brought word of the flow’s collapse to the emperox and unexpectedly fell in love. Also on her side is the mercurial Kiva, who has herself also found love with her girlfriend Sennia. Against her is, well, almost every other member of the noble and ruling houses of the Interdependency. Especially focused on killing and replacing Grayland is her old nemesis Nadashe. Nadashe has already tried twice to murder the emperox. Despite being arrested after the failure of her last coup attempt, Nadashe has escaped and is plotting a third effort to take power. Rather than saving the people of the Interdependency, Nadashe is focused on saving only the elite, moving them to the one planet in the empire that can support human life without relying on interstellar shipments.

Scalzi brings the story to us from multiple perspectives: Grayland, Marce, Kiva, Nadashe, and a few others are the focus of different chapters. Still he manages to craft an ending that surprised this reader in a few ways. I felt a little bit of book-hangover when it was finished. I was not disappointed with the ending. I was disappointed that it ended. I wanted the story to go on, to take the characters further, to find out whether Grayland could put an end to the plotting and save her people, to find out where Kiva and Marce and even Nadashe went with the rest of their lives. Without giving up spoilers, I will say that the trilogy is brought to a conclusion, but there may be an opportunity for a continuation of sorts. I personally hope that Scalzi (or someone he authorizes) takes that opportunity.

The Interdependency trilogy is an ambitious project, one that generally delivers on its promise. I can’t say it is Scalzi’s best work, but it is quite good. Interesting characters and creative plots are hallmarks of his, and The Last Emperox gives readers both in full measure.