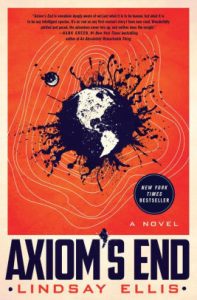 What if your father were the most notorious “leaker” in history? Take Edward Snowden and Chelsea Manning and multiply the impact of their revelations by 1000. That may approach the impact of the world learning about the Obelus Event.

A spaceship crashed on the earth in the late 1960s. Since that time, aliens have been kept in a secret location in California. They are clearly intelligent–they built a spaceship and flew to Earth!–but they make no effort to communicate with us or even with each other in any way we can determine. They accept their confinement for decades.

Then, there is another crash in 2007. A few weeks later, another one in nearly the same location. Both of these are declared to be meteorites by the government, which has never admitted to the existence of the aliens they are holding in California. Two meteorites hitting in the same general area of Southern California is hard to accept, but the government is holding to its wall of silence.

One young woman is pulled into the mystery very much against her will. One of the aliens from the later “meteorites” shows up in her home. Soon thereafter, the CIA comes and takes her family into custody. She only avoids capture because she is out looking for their missing dog. She finds the dog. She also finds the alien. And one thing leads to another and to another and to another in a wild adventure to Northern California and then across the country.

Saying too much would be easy, so I will try to err on the side of avoiding spoilers. Let’s just say that the young woman and the alien spend a lot of time together throughout the rest of the novel. And author Lindsay Ellis does an incredible job of exploring the possibilities and pitfalls of communication between two alien species. What kind of communication is even possible between creatures that evolved on different planets? Can there be any sense of a shared morality or common interests? Would an alien enjoy human music? Games? Humor? Would an alien comprehend love? Anger? Fear? Just as we interpret the “smile” on a dog’s face to be an expression of enjoyment, would we impose our own context on it, assuring miscommunication with potentially catastrophic results? Is understanding even possible?

Readers of this blog know that I really enjoy novels that explore these kinds of challenging thought experiments. Until we actually encounter aliens (and I am geeky enough to hope that we do), we cannot know whether any kind of understanding is even conceivable. We can hope that intelligence itself would lay a common foundation, that perhaps mathematical concepts or physical laws would give enough of a shared experience that we could find a means of connection. But we can never know what we don’t know. Considering that we cannot effectively communicate with other intelligent creatures on our own planet perhaps we delude ourselves by thinking that a human/alien rapprochement could ever happen outside of fiction.

Still, it’s a really fun delusion that makes for a compelling and fascinating novel. Axiom’s End is a smart and fast-paced story that takes the reader for a thrill ride across America and through a world of ideas.