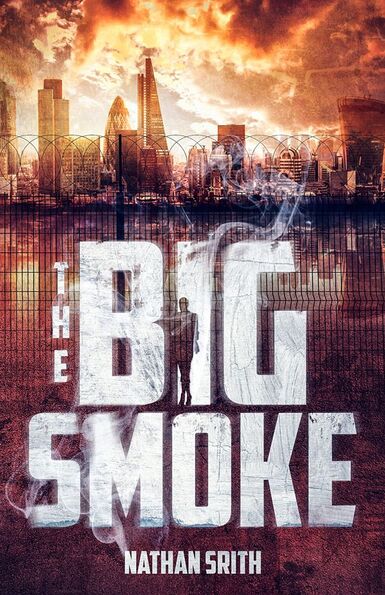 One of the distinct pleasures in blogging about books is learning about new authors and their debut works. Nathan Srith has just published his first novel, The Big Smoke. If this is any indication, he has a ton of potential as a storyteller and writer. I look forward to his future work with enthusiasm.

In a modern but very dystopian version of London, a fence separates much of London from the rest of the country. Armed gangs roam the streets, keeping the population in check. “The Boss” is Prime Minister. She rose from being an obscure YouTube vlogger to becoming the voice of the people and was swept into office by popular vote. Once in power, though, she turned to violence and oppression to consolidate her authority. Enemies were jailed, killed, or just disappeared. Most ethnic minorities fled or went into hiding. Dissent was forbidden.

The Boss’s right hand man, Nick King, has been with her from the beginning. He helped inspire her to begin vlogging. He wrote many of her early speeches. He remained by her side as she rose to power, and helped launch some of the oppressive measures after she took power. But when the Boss imprisons Nick’s sister, she has gone too far for him to take any more. He helps his sister, Emily, escape, and together they flee 10 Downing Street and try to escape the city once called “London.”

The novel moves back and forth, from earlier days when The Boss was an idealistic young woman voicing the frustrations of the young and the working class to the present and Nick and Emily’s escape. Nick and Emily face many of the problems one would expect in this type of novel: finding food, fighting or avoiding enemies, evading capture, gathering new friends and allies. Relying on each other, they find new strengths within themselves to confront those challenges. It is not a criticism to say this plot style is typical of the genre. Srith handles it well, using each challenge as a point of growth for either Nick or Emily or both of them.

I will say this novel suffers from some debut novel flaws. The entire premise of London becoming a fenced-in dictatorship cut off from the rest of the country is highly improbable. Nick tries desperately to be a good person, but he allowed and participated in some awful things. Some of the other characters are (IMO) far too quick to overlook his past and accept the new and improved Nick of the escape.

Those flaws, though, do not change my overall positive view of the book. Nathan Srith is a solid writer, with strong dialog and a plot that (despite the weaknesses noted above) kept me involved and eager to finish. Nick and Emily are appealing characters, The Boss is a complex villain with a nuanced back story, and the secondary characters are often unpredictable and operate from sometimes surprising motivations. I hope that there is a sequel (or sequels) to this book, and I am confident that Srith has much more to give us in the future.