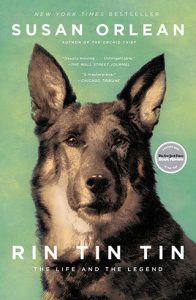 Susan Orlean is a genius at making you think you are reading one book when in reality you are reading several books she has incredibly forged together in an unbreakable alloy. Rin Tin Tin masquerades as a book about the famous movie German Shepherd of that name. But it is so much more. It is a book about the rise and fall and rise of animals in entertainment, about the transition from silent movies to “talkies,” about the growth of TV as an entertainment medium, about the enduring power of an idea. It is a history of the transition of dogs from working beasts to companion pets in homes and about the growth of dog training as an industry. It is the story of the woman carrying forward the genetic legacy of Rin Tin Tin and of the man who became the guardian of the legend’s public legacy. Most of all, it is the story of an orphan boy and his dog, who saved each other and loved each other.

Lee Duncan grew up in California. His father abandoned the family when he was very young, and although she tried desperately to take care of him and his sister, his mother was eventually forced by financial hardship to leave her children in the care of an orphanage. Lee and his sister spent several years at the orphanage until finally their mother was able to reunite the family. Throughout his life, Lee held a special place in his heart for orphans and orphanages, making a point to visit them frequently and often support them in other ways as well.

As a soldier during the first world war, Lee served in France as a mechanic. While there, he came upon a gruesome scene that changed his life. A bomb had struck a barn housing a kennel, leaving dozens of dead and maimed dogs in the wreckage. Near the back of the barn, with shockingly few injuries amidst the mayhem, lay a dog with a litter of very young puppies. The soldiers rescued the dogs and Lee adopted two of them. The girl he named Nanette. The boy was the first Rin Tin Tin.

Lee managed to get the dogs home to America, though he was forced to give Nanette away soon after arriving in the states. “Rinty” became his inseparable companion. The man and the dog shared an unusual bond for the time. Dogs were still considered mostly working animals. Lee considered Rinty to be much more than that. He trained him to do numerous tricks, both with verbal commands and later with silent commands. Occasionally he would take Rinty to dog shows to perform. At one of those shows, a cameraman captured the dog in action. This set in motion the idea in Lee’s mind that Rinty could be in movies–and opened the eyes of Hollywood executives to the possibilities the dog had.

It took time and persistence, but eventually Rin Tin Tin made his Hollywood debut. He was a hit. At one time Rin Tin Tin was the biggest star in Hollywood. Star of multiple silent movies, he was an action hero, a tragic figure, a loving “husband” and father, the embodiment of American values as expressed in the 1920s. Lee enjoyed some of the fruits of Rinty’s fame; a large house in Hollywood, rubbing elbows with noted stars, traveling around the country. Rinty visited orphanages everywhere they went, giving children the chance to meet the King of Dogs. Rinty’s fame also made German Shepherds the most popular dog breed in America and Rinty’s own puppies sold for large sums or were gifts to prominent individuals.

Of course, dogs are not a long-lived species. Rinty’s fame fizzled before his life ended, and Lee moved with his aging star out of Hollywood. When Rin Tin Tin died, the news still made headlines around the world, but the reality was that the money and fame had died some years before the animal did.

Although Rin Tin Tin himself was dead, Lee was determined to keep the idea and the ideal of Rin Tin Tin alive. Rinty’s pup, “Junior,” made some movies but never had the talent or charisma of his father. The country was also changing. Talkies had replaced silent pictures. A dog’s barking simply could not compete with human dialog in entertainment. Still, Lee persisted. A Rin Tin Tin became the “face” of the World War II effort to bring dogs into the war effort. And after the war, the medium of television became the new vehicle to bring Rin Tin Tin to the world.

Susan Orlean dives into her subjects with a passion that borders on temporary obsession. Whether she is writing about orchid growing (and smuggling) or about the Los Angeles Public Library, she goes well beyond the public records. She interviews people, reads primary source documents, even deciphers cryptic notes written in the margins of other papers. For Rin Tin TIn she got to know Lee Duncan’s daughter, the family of Bert Leonard (who brought Rinty to television), the Texas woman who was still breeding descendants of the original Rin Tin Tin as of the writing of the book, aging Hollywood figures, and people who remembered the founders of the first dog training academies in the US. She spent days with the papers and mementos of Lee Duncan which are housed at the Riverside (CA) museum. She found a nearly abandoned storeroom with papers and videos of Bert Leonard. She even visited the grave of Rin Tin Tin in Paris and the small town in France where the dog was born and then rescued by Lee Duncan and his fellow soldiers.

Beyond the incredible research, though, is a great talent for telling a story. All of Orlean’s books read like gripping novels. They are full of facts and data and research, but they are presented in an engaging and moving way that brings the characters to life. You don’t just learn about Lee Duncan and Bert Leonard and Rin Tin Tin. You get to know them, their lives, their ambitions (at least the human ones), their fears, their successes and their failures. You realize that within their stories are universal human (and canine) stories of longing and obsession and searching and triumph and tragedy. And you understand that behind the movies and TV shows about an amazing dog is a story most of us can relate to: the power of love to transform a lonely life.