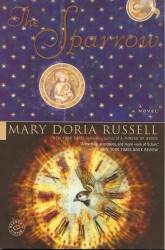 Some books pose as one genre, but are really quite something different when you get behind the cloak they wear. The Sparrow by Mary Doria Russell is just such a book. On the surface it is a science fiction novel, the story of a mission to an alien planet gone horribly awry. It is that. But that is far from all that it is.

Father Emilio Sandoz, S.J., has returned to Earth alone. Part of the first mission to Alpha Centauri, he and a group of unlikely explorers were sent by the Jesuits to make contact with “The Singers,” a race known only by their music which was discovered by SETI using the gigantic radio telescope in Puerto Rico (which coincidentally was just destroyed in a disaster while I was reading this book).

Certain facts are known about the mission. Only Sandoz survived. His hands were grotesquely mutilated during his time among the aliens, and he was found in a “whorehouse.” When the leaders of a subsequent mission found him, his first act was the brutal murder of the native child who led them to him. What is unknown is the why and the how. Why would a Jesuit priest be living as a prostitute in an alien city? Why would a priest known for his gentleness and his way with children on Earth murder a child in cold blood? What happened to the other members of the mission? How did things go so wrong?

This is where the power of this book is displayed. Told in vignettes from the Jesuit’s investigation of Father Sandoz’s actions and in flashbacks to the time leading up to the mission and to the mission itself, the true nature of the novel comes out. This is an exploration of an individual’s faith. Emilio Sandoz is an unlikely priest. Born in Puerto Rico to a family involved in drugs and crime, he finds solace and purpose in his Catholic education and in his priest, a rough and wily Texan who served as a Marine before entering the priesthood. Sandoz goes on to become a linguist, serving in varied settings around the world and learning new and very different languages in order to connect with the communities. Finally he requests assignment to return home to Puerto Rico, where he befriends a young radio astronomer–the man who discovers the music of the Singers.

Father Sandoz’s journey to Alpha Centauri is really his journey to find God. Despite being a priest, despite taking his vows seriously, he questions the existence and the nature of God. Initially, the trip to the nearby star seems to confirm and strengthen his faith. An unlikely team comes together to make the trip, a team mostly comprised of people he brought together. Logistical and technical hurdles fall one after the other to make the journey a reality. His own order plans and funds the trip. Surely God made this happen!

But if God made the trip happen, he must also have made the tragedies during the trip happen. You can’t attribute good things to God’s power without also accounting for violence and death and catastrophe. If He made the voyage to Alpha Centauri possible, then was he not also responsible when things went so horribly wrong? That fundamental question of life, addressing the role of whatever deity you worship (if you do) in both good and evil, is far from a science fiction trope. It is central to theology, philosophy, literature as a whole, large swathes of history, and many other aspects of human meaning and morality and dignity. Russell’s characters ask each other deep theological questions. They reject trite and easy answers. They probe and question and search and fall and rise and fall again. Is there a God at all? Does “He” care about us? Why is there evil? What is my purpose? Is celibacy (or indeed any offering to God) of any value? Can a good person do evil things? Why do evil things happen to good people? Where is God when all else has failed?

The Sparrow takes its title from the Bible verse Matthew 10:29, “Are not two little sparrows sold for a copper coin? And yet not one of them falls to the ground apart from your Father’s will.” Russell may cloak her novel of faith and doubt with a veneer of science fiction. The result, though, is an extraordinary work of fiction that transcends genre.