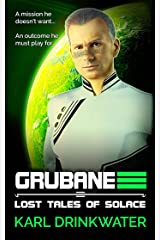 Grubane is a novella set in the universe Karl Drinkwater has explored in two novels and one other novella. Major Grubane is commander of the Aurikaa, the most feared cruiser in the NFS arsenal. He and his handpicked crew have never failed to complete a mission.

The Aurikaa is sent to pacify a world which is defying NFS control. When he receives his original orders, Grubane believes a diplomatic resolution is possible. After arriving at the planet, though, his orders change. He is ordered to kill one-million inhabitants of the planet. Should he fail to do so, another ship has similar orders to do the same thing to his homeworld. That ship and that commander will happily carry out those orders.

Grubane has taught himself to play the ancient game of chess. His favorite opponent is the ship’s AI. This AI has learned much more than chess, though. It has begun to think for itself. It is experiencing things that can only be expressed in emotional words. It has become sentient.

Drinkwater has explored sentient AIs in all four of the Solace books. Aurikaa was not designed to be sentient, but its design pushed it toward that development. Grubane recognizes this and utilizes it, bouncing ideas off the AI both as a means of refining his own thinking and as a means of pushing the AI to grow in its sentience. Using chess as a teaching tool, Grubane helps the AI strategize, to see through the eyes of its opponent, to consider alternative outcomes and possibilities. Aurikaa begins to develop a conscience, wonders whether Major Grubane is its friend, even considers the possibility of getting a name of its own, and weighs the pros and cons of being gendered versus non-gendered.

Although the book is short, the ideas presented are not shallow. Drinkwater packs an awful lot into a small collection of pages. Between the ethics of battle, weighing the lives of your family and your homeworld against the lives of total strangers, and the evolution of an AI, every chapter is essential and every chapter moves things along. The twist at the end is both satisfying and, well, saying more might give something away.

Grubane reminded me just how much I enjoy Karl Drinkwater’s work. He is a gifted writer whose plots go much deeper than the number of pages would seem to allow for. Each book brings its own special uniqueness to the table, and a table Drinkwater sets is one I will visit every time I can.