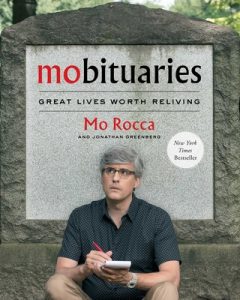 Did you know that Thomas Paine, famed author of the Revolutionary War era pamphlet Common Sense, writer of the sentence “These are the times that try men’s souls,” the single best selling American author in history (by percentage of the American population), died as a pauper and had only six people attend his funeral? That number includes the presiding clergyman, his housekeeper, and her two sons.

Were you aware that Jackie Robinson was NOT the first African American to play in the major leagues? Or that there were African American congressmen and senators in the 19th Century? Or that Amelia Earhart was not the first female pilot–and among her predecessors was an African/Native American woman?

These are among the facts explored in Mo Rocca and Jonathan Greenberg’s delightful book Mobituaries. Mo Rocca began doing “mobituaries” as a piece for CBS’ Sunday morning show and as a podcast. The website is www.mobituaries.com. The shows highlight interesting people and events from the past which deserve a deeper look. This book takes several of the earlier episodes and brings them to a new audience or revisits them for his existing audience.

I first heard Rocca as a panelist on the NPR show “Wait Wait…Don’t Tell Me!” Billed as “the NPR news quiz,” Rocca is one of a rotating cast of humorists and comedians who, along with host Peter Sagal and announcer Bill Kurtis, answer questions about actual events and offer humorous takes on those same events. (This doesn’t really pertain to the book, but as good as Bill Kurtis is, I will always miss Carl Kassell who passed away in 2018.)

Back to Mobituaries. Mo Rocca admits to always being a fan of obituaries but feeling like some of them left unanswered questions. He is also a history buff. Combining those interests started his journey that has now resulted in these vignettes of the famous and formerly famous and should-have-been famous people. Since they are “mobituaries” and not “obituaries,” he takes the license to “mourn” (or celebrate) the passing of other things as well. One mobituary is for dragons. They may not have been real, but people thought they were for a long time. (I have family members who may still believe that Smaug from The Hobbit was once an actual threat. Please do not disillusion them.) Another is for a diagnosis: Homosexuality as a mental illness in the DSM (the official book of the American Psychiatric Association listing mental illnesses and conditions along with treatment options). Sometimes a mobituary remembers a group of people: African American congressmen from the Reconstruction period after the American Civil War. Other times it remembers people who died on the same day as someone else whose death took most of the public’s attention: Farrah Fawcett, 1970s sex symbol and actress who died on the same day as Michael Jackson. Cultural icons are remembered: the station wagon and shag carpeting. Historical monuments that have fallen into disrepair: Hadrian’s Wall.

Perhaps most revealing are the mobituaries for forgotten pieces of otherwise famous lives. President Herbert Hoover will always be associated in the United States with the beginnings of the Great Depression. I did not know, however, that before becoming president he had been a very successful businessman, philanthropist, and cabinet official. He had wildly succeeded at everything he did, and did an enormous amount of good, prior to becoming president. (And it is fair to wonder whether anyone could have prevented the stock market crash and the resulting economic foundering.) Those successes, though, have been lost to history by the overwhelming memory of his being the president whose term ushered in the worst economic depression in world history. Actress Marlene Dietrich is remembered for her sultry looks and voice. Not as well remembered is her tireless support of the Allied war effort during World War II against her native Germany. Another sexy icon, Elizabeth Taylor, is remembered for her acting, her marriages, her perfumes, her marriages. Less well remembered but perhaps more important was her advocacy in the 1980s and 90s for AIDS awareness, research, funding, and acceptance.

Even with all of the famous people, interesting stories, and fresh looks at history, the mobituary that meant the most to me was that of Mo Rocca’s father. Marcel “Jack” Rocca (1929-2004) was not famous. He was not rich. But according to his son, he was a good man who loved his family. He took up the trumpet when he was 50 years old, and devoted himself to playing it every day for much of the rest of his life. He never held illusions about making a career of it. But he insisted of himself that he get a little bit better every day. He played in a band with some other middle aged (and older) men, mostly in nursing homes, mostly old classics. And he accepted his children for who they were and what they were and loved them unconditionally. I would be honored to know that was the legacy I left for my own children. (Minus the trumpet.)

Mobituaries is a wonderfully written, sometimes whimsical, sometimes moving, often enlightening collection of stories of the world. Mostly an American focus (he is on an American TV show after all), it reminds us of things we may have forgotten and teaches us things we may never have known. Engaging and delightful, this is a book that is very well worth reading over and over again.