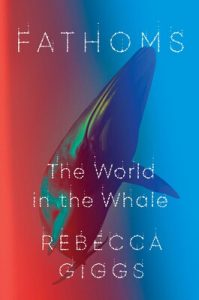 Fathoms is a difficult book to read for many reasons. All of those reasons also make it a book that you should read.

The book begins and ends with beached whales. Author Rebecca Giggs visits the sites of both beachings in Australia, her home country. In the first chapter, the beached whale is alive but dying. Giggs does not shy away from the difficult and horrific process of a whale’s death on a beach. Whales are not built to live out of the water. On land, their bulk weighs upon their lungs, compressing them and slowly suffocating the mammals. Additionally, their blubber traps heat within their bodies. In the water this keeps them warm and alive. On the beach, it cooks them from within. The size of the whales also defies efforts to euthanize them humanely. Poisoning them requires so much that the meat and blubber is fully contaminated, poisoning also scavengers and even poisoning the ground where they lay. Other methods have equally distressing consequences. So the whale dies, broiling and suffocating, it’s eyes on the humans who gape in wonder but who cannot glimpse what thoughts the creature might have.

Beached whales are found throughout the book as well. One whale found on a beach was necropsied. Inside it’s stomach was found an amazing amount of human detritus. Half a mattress shared room with a complete greenhouse. Yes, a greenhouse. A storm had blown a tomato greenhouse into the ocean some time before. That very greenhouse was found in the belly of a beached whale hundreds of miles from the location where it entered the ocean. Perhaps the whale beached itself because it was starving, it’s belly full from our obsession for fresh off-season fruit and vegetables.

The subtitle of Fathoms is The World in the Whale. One chapter is dedicated to the zoo that resides within the ark of the whale. Whale lice and giant internal worms and fish that physically attach themselves to the whale. Each species of whale has it’s own unique species of whale lice and internal parasites. Should a whale die, most if not all of the other animals that call it home die with it. Should a whale species go extinct, it would take multiple diverse species along with it to oblivion. Though it’s hard to get nostalgic at the extinction of a gigantic parasitic worm, it still diminishes the genetic diversity of the planet and in some way impoverishes us all.

Most of the book, though, reflects on the ways our world is within whales. Our hunting has changed their behavior, their songs, their distribution. Our noise has affected their communication. Our fishing has created oceanic areas of “defaunation,” places where animals are so rare that whales no longer have prey along their migration routes. Our plastics line their stomachs. Our nets wrap their bodies. Our metals and pollution are in their blubber and placenta–baby whales born today carry chemical echoes of pollutants banned decades earlier. Oceanic acidification reduces their prey even further, and global warming changes their habitats. Already whales from the Atlantic and Pacific are mingling and sometimes interbreeding as they wander through the de-iced Arctic Ocean.

Giggs takes a reporter’s tone through much of the book, but it is clearly a deeply personal book to her as well. She often refers to her childhood fixation on the skeleton of a blue whale that hung from the ceiling of the Western Australian natural history museum. Her personal notes from the beachings at the beginning and end of the book are poignant. Yet somehow the clinical dispassion she uses when writing about the death of a young dolphin that died in the arms of a man holding him for locals to touch and take selfies with makes that death resonate even more powerfully than a more lurid telling would.

Fathoms is a brilliant book. Giggs strikes a careful balance between reportage and memoir. Her vocabulary is extensive–defaunation is only one of the words I had to look up! At times the book is very disturbing and it refuses to look away from the darker sides of the human/whale interaction. It is one of the most illuminating looks at the very significant impact our species has had on an environment as alien to us as is the surface of the moon.

I will never look at winter tomatoes in the same way.