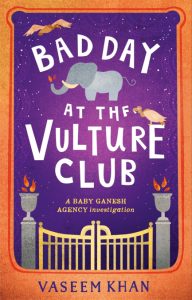 Things have been going well for prematurely retired Inspector Chopra. His restaurant is thriving. His detective agency has had some successes and has hired another investigator. His “ward,” the young elephant Ganesh, is healthy.

Perizaad Zorabian’s father was murdered. The police conducted a cursory investigation and concluded that the crime was one of opportunity and unfortunate timing–the deceased came upon an intruder and was beaten to death. This explanation does not sit well with the young woman, who asks Chopra to look into it himself. When he learns that the investigation was led by none other than his long-time nemesis Inspector Rao, his suspicions grow.

Rangwalla, Chopra’s investigator, is pursuing a case involving a building’s collapse. A man’s daughter and 12 others lost their lives after an explosion brought down the building they were in. The building’s owner had been tried and convicted of negligence and was serving time. However, this father did not believe the official story. He had been a building inspector himself, and determined prior to the explosion that the structure was sound. The owner, a long-time friend of his, and asked him for his opinion after being pressured to sell and then seeing officials conduct a surprise but very minimal inspection and then condemning the building. Something seemed off and he wanted Rangwalla to find the answers.

Khan puts together a delightful and fascinating story, one that celebrates the beauty and history and culture of Mumbai as well as one that puts some of the systemic failures of the country in the crosshairs. The Zorabians are part of a small ethnic and religious minority, the Parsees. Although they are generally tolerated and even respected by the majority population, their practice of leaving their dead on towers to be consumed by vultures does disgust many people. Still, the people are generally well educated and relatively wealthy. Khan’s characters, Chopra and Ganesh, look at the culture with outsiders’ eyes but with compassion for the challenges this ancient sect faces in a modern India.

Although corruption and bribery are hardly unique to India, they are certainly problematic there. Khan’s story shows very directly the dangers posed to individuals and to society. Not only are people murdered in the story for exposing corruption, but entire neighborhoods lose their homes without affordable replacements when officials allow ruthless developers to run roughshod. One thing I loved about the story, though, is Khan’s celebration of those bold enough to stand up to corruption. The true heroes of this story, beyond the dogged investigators and their support pachyderm, are some honest people who stand up to expose the truth.

Part of the joy of these books for this American reader is the otherworldly idiosyncrasies of the world’s largest democracy. Mumbai is a modern city. Skyscrapers, technology, medicine, industry, traffic. It has all the trappings of New York and Los Angeles, places I have lived and cities that I love. In Mumbai, though, a man can walk the streets with a baby elephant and the main reaction is largely indifference. Vultures eating human corpses from towers in the city is also not something I think would work in American culture. And as odd as my country gets–and believe me, we have any number of things that even we acknowledge make the rest of the world question our national sanity–I am not sure we have anything that quite matches the national Poo2Loo campaign in India against public defecation, complete with a human-sized turd as its mascot. Apparently this is not only a real campaign but it has been internationally recognized as effective in improving sanitation and thereby public health.

I can only say, if you think your job is bad, it is not “dressing as a human turd to visit middle schools” bad.

Khan’s writing is sharp, his story is full of surprises, his setting is lush with the smells and sounds and beauty and squalor that is modern Mumbai. I love everything about these books.