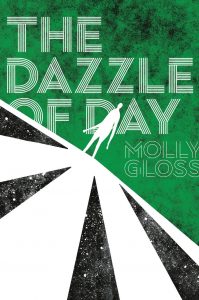 So much of sci fi ignores religion completely. It is not so much agnostic or even atheistic as it is absent, as though at some point humans just stop thinking of the cosmos in spiritual or mystical ways and simply embrace science as their god.

There are obvious exceptions. The Expanse series uses a gigantic ship built by Mormons as an important setting. I remember some poignant Asimov short stories that had religion as prominent themes. Others invent new religions or bring in aliens with some kind of religion. Mostly, though, it is just not there.

The Dazzle of the Day by Molly Gloss is radically different. Earth is becoming uninhabitable, and various groups have created generational ships to seek new homes. One of these groups is made primarily of Quakers. Coming from all over the earth, this group has determined to go together and find a new home, away from the religious persecution that has become more pronounced as resources become fewer.

The story begins on earth, with one woman’s nighttime wrestling with her decision to go on the ship. She walks around her village, weighing whether she actually intends to leave. Not everyone is leaving. She will never see their new home, and she is older, unmarried, not likely to contribute to the gene pool that will eventually arrive at the new, as yet unknown, planet. Still, she has been welcomed as part of the group.

Most of the book follows a single family, many years later, as they approach the planet they may choose to live on. Juko, the wife, is one of the craftspersons who keeps their “sail” mended. Her husband Bjoro has gone ahead to the planet as part of a small mission to determine whether it is suitable. Her son is a farmer living with his father, her ex-husband. Bjoro’s mother, Kristina, shares her home with the couple. In the weeks and months leading up to the decision point, the family faces stress from a variety of sources, much of it driven by their own internal challenges.

I don’t want to give away too many spoilers, though the book has been out for many years now. Since I just discovered it, though, perhaps there are some others who have not found it as well. There are three things that really impressed me about it. First, as mentioned above, is the central place that religion takes in the book. Not everyone is spiritual, not everyone closely adheres to Quaker beliefs and traditions, but the Quaker method of building consensus and listening for God’s spirit continues to guide the people even generations later. As prone as humans are to seek the divine, this strikes me as a much more realistic view of a possible future than one where all gods have been erased. The second is the presence in the story of both elderly and disabled persons. One of the families leaving Earth has a son with a mental disability. Not only will he likely not contribute to the gene pool nor be able to assist with the duties on board the ship, he will arguably be a burden on the society. Later, we see people who are old, infirm, born with birth defects, mentally ill, all participating to their ability in the culture of the ship. These people should be expected to live on board a generational ship, but again in science fiction they are seldom seen and even more seldom are they major characters. The third is something I have wondered myself in my musings on generational ships: would the people actually WANT to live on a planet by the time they arrived? After all, they knew nothing else but the ship. Nor did their parents, or grandparents, or great-grandparents. Author Molly Gloss asks that question in a variety of ways and explores it through the feelings and actions of several characters. It is one thing on Earth to dream of setting out to find new worlds. If that journey took decades, even centuries, and the people charged with settling that new world had never set foot upon a planet, would they choose a different path?

Gloss’ writing is smart. Her characters are as dazzling as the day, and she leaves much to the reader’s imagination. She allows us to build the world with her, to see it through their eyes, and to wonder ourselves what our choices would be. This is a very thought-provoking book.