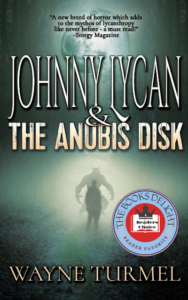 Johnny Lupul is just starting out as a private investigator in his hometown of Chicago. He has his PI license. He has his concealed carry permit. He has his first case: rescuing the kidnapped daughter of a local bookie. And if all that fails to lead him to a successful career he has one additional attribute he can draw on.

Johnny Lupul is a werewolf.

After successfully rescuing the girl, Johnny gets hired by a mysterious old man to retrieve a stolen object. This disk is supposed to have extraordinary power. Johnny doesn’t really believe in magic but he does believe in the hefty retainer the old man gives him….

I’m just going to pause a moment to let that sink in. A werewolf. Doesn’t believe. In magic. OK, back to the review.

Where belief in magic stops, belief in having enough money to pay the bills takes over. Johnny finds the disk and goes to retrieve it. In the process, the disk’s power is activated, and Johnny’s world turns upside down. Magic is real. The nice old grandmother who lets him rent her basement is not a charlatan: she is actually a seer. The strange objects the old man collects actually are imbued with power. And suddenly being a werewolf is the most normal thing in Johnny’s world.

Wayne Turmel has had a bit of a magical awakening of his own. He has written many books. Non-fiction business books. Historical fiction. But never urban fantasy. Never werewolves. Despite being fascinated with werewolves since watching an old horror movie when he was a child, he pursued a more prosaic style of writing. Still, the werewolf stories were (ahem) howling to get out. Hence we have an urban fantasy with a touch of detective noir built in, and more than a touch of a very wry sense of humor as well.

Johnny Lycan and the Anubis Disk is meant to start a new series. Without giving away too many spoilers, there is a lot of unfinished business at the conclusion of this book just waiting to come out some more in the future. Lupul is on retainer to his client, his firm has hired its first staff member, and a new case awaits.

I, for one, am eager to see where this story goes. This is a quick read with a lot of appeal. Not nearly as dark as many urban fantasies (though it does have scenes of both violence and sexuality that might be off-putting to some readers), Turmel has given readers a fun story with an engaging protagonist and plenty of depth left to explore. Buy this book and get ready for a fun ride as the series proceeds. 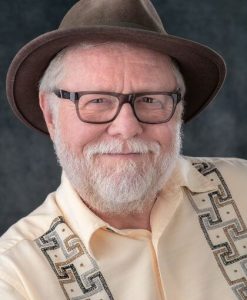 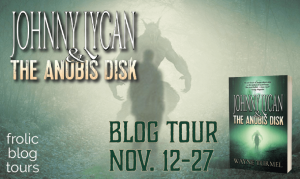 Our thanks to Stephanie Caruso of Frolic Blog Tours for inviting us to participate and providing our copy of this book. For other perspectives check out the bloggers participating on the tour. The opinions here are solely those of Scintilla.

One thought on “Blog Tour: Johnny Lycan and the Anubis Disk, Wayne Turmel”