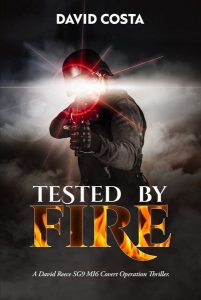 Tested by Fire invites us into a dark and dangerous world. David Reece, codenamed Joseph, leads a small team dedicated to eliminating terrorist threats to Great Britain. One of his long-time agents, a woman named Maria, calls with disturbing news. An old enemy from IRA days has teamed up with Islamic extremists and is planning something big in Manchester.

As Manchester is scheduled to host the Prime Minister’s party conference, and hence the PM himself, the assumption is that the “something big” is aimed at either the event as a whole or the Prime Minister. David gathers his team, including the agent Mary, and begins working to prevent the attack.

Costa lays out an aggressive timeline, not leaving much room for the good guys to solve the case. I suspect, though, that the reality is quite mixed: some terrorist infiltrations and cases must be made over significant time, others require faster resolutions. When your tip comes with only a few days to act, then act you must.

The insights Costa brings to the story are fascinating. Technology plays a major role but there are things that only people can do. Despite the best efforts, people die, both combatants and innocents. Some are true believers, willing, even eager to die for their cause. Others are less enthusiastic in confronting their own demise.

Terrorism may make for strange bedfellows. As seemingly unlikely as a pairing of a former IRA extremist with modern Al Qaeda mujahideen may seem, the enemy of my enemy may become my partner for a specific purpose. Costa may not be relating an actual terrorist plot that was foiled (since nothing like that seems to have succeeded), but he has certainly given us plenty of food for thought. 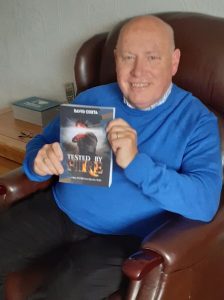 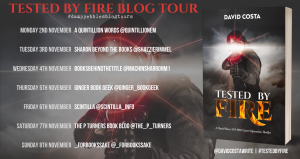 Our thanks to Emma Welton of Damp Pebbles Blog Tours for our copy of this book, given solely in exchange for our participation on this blog tour. For other views of this book please check out the other bloggers on the tour. The opinions here are solely those of Scintilla.info

One thought on “Blog Tour: Tested by Fire, David Costa”