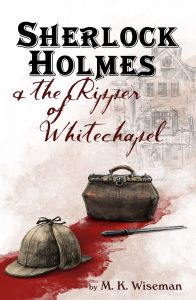 I was a much younger person when I read through the Adventures of Sherlock Holmes by Sir Arthur Conan Doyle. The force of the great detective’s intellect and personality, combined with his ideal partner Dr. John Watson, makes it easy to see why those adventures have continued with homage books by a multitude of authors, movies, TV shows, radio presentations, etc. After finishing this book I started on a crime novel set in Bangalore, India. Only a few pages in the main character laments that he is being compared to Sherlock Holmes! We have reviewed a few of the books inspired by Doyle in this blog, and Holmes and Watson are recurring characters in the novels of Theodora Goss.

Sherlock Holmes & the Ripper of Whitechapel is an ambitious take on the Holmes oeuvre. Author M.K. Wiseman does not merely pay tribute to Holmes and Watson. The author tackles Doyle himself, creating a story written in the Victorian Era style of those early detective novels. Rather than the putative storyteller being Dr. Watson, though, the detective himself takes pen to paper to tell this story that is literally ripped (pun intended) from the headlines.

Holmes is adjusting rather badly to life at 221b without his companion. Watson has married their client, Mary Marston, and they are residing in their own home on James Street. Holmes continues his detective consultancy while Watson tries to build his practice. They remain friends, but circumstances have pulled them in different directions and they do not see much of each other.

Inspector Lestrade calls upon Holmes to assist the investigation into a series of brutal and vicious murders. A serial killer calling himself “Jack the Ripper” is killing and mutilating women in London. He boasts of plans to kill a total of fifteen women and sends letters to the papers taunting the police.

Readers will immediately notice the ambitious goal of Wiseman: mixing the fictional detective’s skills to a true life case. Jack the Ripper was a serial killer who sought the headlines to celebrate his brutality. Five women succumbed to his attacks, being first killed and then their bodies grotesquely mutilated. Then, despite his expressed plans to kill many more, the killings stopped. No one was ever arrested for the crimes. Speculation has continued from then until now. The mysteries have never been solved.

Holmes starts on the case a little later, after the first victims have been killed. Clues lead to someone of average height, mustached, highly intelligent, with some medical training and a persistent limp. And this is where things become very concerning to Holmes because he knows someone who matches that description perfectly. In fact, he knows him so well that he can’t believe it is possible for him to be the killer. The clues, though, point relentlessly to one person, so relentlessly that even Inspector Lestrade can follow them. The suspect: Dr. John Watson.

Wiseman’s goal is very ambitious: write a fictional book in the style and with the characters created by Doyle, weaving in names, events, and sometimes even actual dialog from the actual investigation into Jack the Ripper. The names of the victims, the names of the people who found them, the names of the police officers involved in the investigation, all are woven into the narrative and sometimes take on life as characters within the book. When available from newspaper articles or police reports, Wiseman even places actual words from those characters into the mouths of their fictionalized counterparts. It is easy to see many ways this project could have gone sideways.

It did not. The book is delightful and fully evocative of Doyle’s stories. Although the aware reader is likely to assume that the (fictional) Dr. Watson does not prove to be the (real life) Jack the Ripper, Wiseman lets the story tell itself naturally. We readers may know the two cannot be conflated, but within the story the plan works.

Sherlock Holmes & the Ripper of Whitechapel is a true homage to both the characters and the storytelling style of Arthur Conan Doyle. I am no detective. I do suspect, though, that Sir Doyle and Mr. Holmes would approve of the result.

Our thanks to Rachel Gilbey of Random Things Blog Tours for our copy of the book, given in exchange for our participation in this tour. For other perspectives on this book check out the other bloggers on the tour. The opinions here are solely those of Scintilla.