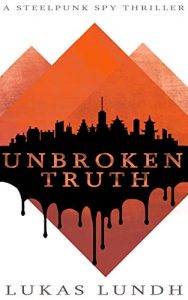 Some science fiction works hard to take readers from “now” to “then.” Worldbuilding involves some explanation of how humans got to wherever and whenever the story is set. Other science fiction just drops you into the world and expects the reader to catch up.

Unbroken Truth definitely fits into this latter style. It is a steelpunk novel, set on a (presumably) distant world inhabited by several intelligent species, including humans. Len is a human. A detective in the city’s police force, she was once part of the homicide squad. However, she fell in love with the wrong person and her career was shunted to the robbery division.

Len’s girlfriend, Vli, is not human.

Vli is (essentially) an adjunct professor at the university, finishing her dissertation while teaching classes. She is studying the history of the original inhabitants of their world, trying to parse between myth and legend and archeology. She is part of a species that was once at war with humans, and now lives on this planet as an ill-regarded minority race.

Other races also live on the planet. The original inhabitants are now a subjugated minority, living primarily in slums on the outskirts of the city and working in dangerous jobs that other species can’t or won’t take. They are an insectoid race that can take the harsh environment without the protective gear other species need most of the time, but they were badly beaten in war and are no longer in charge of their own fates.

Tensions are high as an election nears. Then, a human politician is murdered in her own home. A weapon was used in the killing that was traditional to the Enigna–the native population. A bomb, also of Enigna provenance, nearly kills Vli and does kill her friend and mentor. Len suspects that the Enigna are being framed, but who and why forms the core of the story.

This is Lukas Lundh’s debut novel, and it is an auspicious beginning. He has written a solid police procedural with technology that is essentially 20th century on a world that is alien and strange. Although there is no plague involved, masks are critical to survival. Racial tensions, in this case between alien species rather than human skin tones, roil their society. Militias, corporate interests, and an uncontrolled military threaten the stability of their democracy.

Don’t misunderstand me. Lundh has written an excellent story. The characters are interesting, the plot keeps moving, the world is fascinating, and there is the promise of more from this gifted writer as the sequel has been nicely set up. But it is also very contemporary, with plot lines that could have come straight from the headlines in many countries this year. Sometimes to really see your own world, it helps to get a perspective from a strange planet orbiting a distant star. 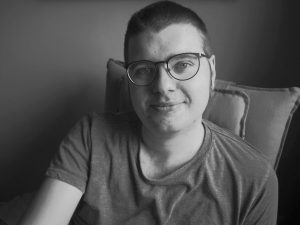 Our thanks to Rachel Gilbey or Rachel’s Random Resources blog tours for our copy of this book, provided solely for our participation in this blog tour. Check out the other bloggers writing about this book. The opinions here are solely those of Scintilla.