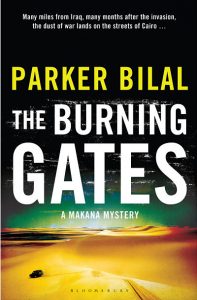 Detective Makana has worked for rich, powerful, and influential people, although most of his jobs keep him on the seedier streets of Cairo, his adopted home. He has never quite had a client like his latest, a powerful art dealer who hires him to find a painting–and it’s owner.

The painting disappeared from Kuwait during the Iraqi invasion. Now, some 14 or so years later, an American collector has come to Cairo following rumors that it has arrived along with the Iraqi general who took it from Kuwait. This Iraqi general is wanted by the Americans for war crimes, so if he is indeed in Cairo that would be extremely embarrassing to the Egyptian government. Even more embarrassing is the fact that he could not possibly be in Cairo without elements of the government knowing and deliberately hiding him.

Makana begins searching, using his contacts in the police, the government, the press, and even the mob. Before he gets too far, though, people involved in the case begin dying. Some secrets go to the grave, and some people are willing to send others to the grave to keep their secrets.

As with his previous Makana mysteries, author Parker Bilal weaves a complex procedural story around an in-depth character study. Detective Makana has never, perhaps will never, recover from the trauma that led to his exile from Sudan, the death and supposed death of his wife and daughter, and the imprisonment and torture he faced at the hands of his former aide. When he discovers a young woman from Sudan who reminds him of his missing family, he throws caution aside to come to her aide. He may not be able to help his late wife or his missing daughter, but he refuses to accept that he cannot help this lost soul.

I love the way that Cairo interacts with the plot almost as though it were another character rather than the setting. The disparity between rich and poor is often highlighted: a planned hospital is not built to make room for a lush golf course in the middle of the desert. Two brothers seek power by appealing to very different constituencies: one serves the poor with an eye toward a grass-roots movement, the other caters to the rich and notable hoping to curry favor with them. Neither brother acts altruistically. Both of them are ruthless and opportunistic gangsters. And both of them interact with Makana in ways that bode ill for the future.

I am writing this review on September 12, 2020, the day after my country remembered the attacks of what we call “9/11.” My countrymen easily remember that almost 3000 persons died on that day. We forget, or choose to forget, the literally millions who were killed or wounded or lost their homes or their livelihood or their country when we sought our revenge. The Cairo and the characters of this book are in Egypt, but the events set in motion on 9/11 affect them profoundly. They are well aware of the invasions of Iraq and Afghanistan. They follow the progress of the war. They fear that Egypt could be next on America’s list. They offer a very different perspective on events that seem very familiar to us in the US. Dare I suggest to my countrymen that we were not seen as “Iraq’s liberators” by the people from that region of the world? Could it be that the sympathy gained by the attacks of that day was quickly squandered by the War on Terror? Perhaps we are not the “envy of the world” as we like to perceive ourselves to be.

The Burning Gates is a character study and a mystery. Most of all, though, it is a really good book. It may fit neatly into a genre, but you may find that it will stick out in your heart.