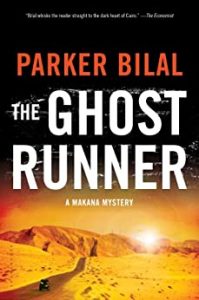 Detective Makana takes a lot of cases that involve shadowing people through the streets of Cairo to see whether they are committing adultery or engaging in some other unsavory activity. So it is no surprise when the wife of a prominent lawyer asks him to follow her husband because she suspects he has something going on the side.

After a week of following the man, Makana is surprised to discover one possible secret. The lawyer is paying for the care of a young woman who was badly burned in a fire. Police do not intend to investigate. They believe it was a suicide attempt that almost succeeded. And, indeed, the woman dies soon after.

Makana is more surprised when the lawyer approaches him with a request. He has learned from his wife of Makana’s investigative skills and wants Makana to look into the death of the young woman. She was the daughter of a former client of his, a man living in exile in Denmark, wanted on terrorism charges. Rumor has it that he has returned to Cairo and may have had some involvement in the death.

This is 2002, though, mere months after 9/11. How could a known terrorist have returned to Cairo under the noses of the state security police? Why would the man have wished harm to his daughter? Could the answers be found in the oasis community of Siwa, where the man and his former wife were from?

Perhaps more importantly, could Makana move on from the death of his wife and the loss of his own daughter and find love again?

The Makana series is one of those series that starts at an extremely high level and then just keeps getting better. Detective Makana is world weary. Originally from Sudan, he has fled to Egypt to escape the Islamist regime that now rules his homeland. Still an outsider in Cairo even after many years living there, he struggles to find new meaning to his life. Almost in spite of himself, though, he has begun to collect a circle of friends. A journalist and his wife who love to help with his investigations. A cabbie willing to take him anywhere at any time. A young girl who has appointed herself as his secretary. Even the police sergeant who constantly warns Makana against getting involved. When Makana is in Cairo he relies on these friends to support and guide and even protect him, and he does the same for them. When he is on his own in Siwa, he faces a new set of challenges without that support network. Those challenges nearly kill him.

The mystery plot is compelling and hard to guess, at least for this reader. I found the twists at the ending surprising and yet satisfying. I did not guess them ahead of time (unusual for me), but did not feel like they were simply sprung upon the reader without proper set up. Those are my favorite kinds of mysteries, when I can look back on the novel and say, “Oh, THAT’S where it was going!”

However, the Makana mysteries are less about the mystery and more about the detective. Makana is a rich character. Parker Bilal has created a detective with wisdom and depth, a wounded soul who cares too deeply and wants to fix a world broken beyond his ability to repair. The setting is magical: Cairo and Egypt, the Nile, the desert, the ancient cultures forced to accommodate the modern world superimposed over them. Like the rest of the series, The Ghost Runner is a book that promises and delivers a mystery. Far beyond that, though, it supplies the reader with an intriguing protagonist living in a dynamic setting. I like everything about this book and this series.