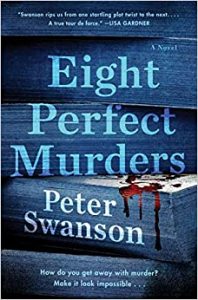 The premise of the book is simple enough. Bookstore proprietor Malcolm Kershaw wrote a blog post several years ago about eight “perfect murders” from mysteries. All eight were murders where the perpetrators either did escape or nearly escaped justice, being caught only out of sheer luck or misfortune. Some were committed in ways that made them look like unfortunate accidents: a drowning, a heart attack. Others were committed with so much misdirection that the fictional detectives on the case were unable to determine which were legitimate clues and which were red herrings.

Now, years later, an FBI agent has approached him. She was searching for anything connecting a series of seemingly random murders, and Kershaw’s blog post came up. At least three murders seem to follow the basic themes outlined in the books on the list. A body is found lying by train tracks. The commuter was seen on the train, a window was broken out from the train, but the evidence shows that the man was killed earlier and placed there by an unknown person BEFORE the train arrived. A series of murders following a bird theme (a man named Jay, another man with the last name of Byrd, a woman named Robin) echoes the deaths in Agatha Christie’s A-B-C murders. Perhaps most tellingly, a woman who knew Malcolm died of a heart attack and had all eight of the books lined up in order on her shelf.

Clearly the killer has read his list, and it becomes clear the killer also knows Malcolm. But Malcolm has his own secrets, secrets that no one can know. Do they put him in more danger, or will they give him a way out?

Peter Swanson has written a tribute to classic mysteries, both book and film, and also a love letter to bookish readers of all kinds. A protagonist who owns a mystery bookstore? Come on–how cool is that! A blogger pulled into a mystery taken from his own blog? Umm, hello! I mean, apart from the whole “people are getting killed here,” I would love to know that someone has been reading my stuff. (You do know you can leave a comment at the bottom of this page, right?) I may not have as many dark secrets as the narrator of this book, nor would I actually welcome the FBI looking into my life. But this book is definitely a tribute to fans of the genre.

None of that should detract from the knowledge that this is just a very good book. Peter Swanson has not just written a tribute and a love letter. He has crafted an excellent plot, with twists and turns that continue to the very end. Malcolm Kershaw narrates his own story and throughout he makes it clear that he is an unreliable narrator. Just how unreliable…well, I won’t tell. Eight Perfect Murders would be slightly less perfect if I gave away spoilers. Reading it, though, is a perfect way to spend a weekend.