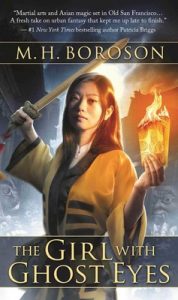 Fantasy: The Girl with the Ghost Eyes, M.H. Boroson

Many years ago now we went to see the movie The Sixth Sense with some friends. Afterward we were kind of buzzing about the big reveal at the end. One of our friends, realizing we were about to share spoilers with the crowd waiting in line to get into the theater, jumped in and loudly said, “I was shocked when the dinosaurs got out of Jurassic Park and ate Bruce Willis!”

That movie brought the phrase, “I see dead people,” into the national conversation, often in venues that are far from the imagination of M. Night Shyamalan. But what if there were really people who could see things the rest of us cannot see? Not just ghosts, but monsters and demons of all sorts? That is the premise for the powerful fantasy The Girl with the Ghost Eyes.

Li-Lin is the daughter of a powerful Daoshi magician. She has been trained in some of the basics of the magical practices, but being a woman she is not considered worthy to receive advanced training. Li-Lin is a young widow living in San Francisco’s Chinatown with her father. She assists him with his magic and secretly uses her own ability to see spirits in the world. This ability is regarded as shameful and harmful. If her father knew she could do this, he would react quite negatively.

A friend of her husband, Tom Wong, brings a supplicant to Li-Lin asking a favor. The favor involves visiting the spirit world in person, something only she could do. As a favor to her husband’s friend, she accepts the task. However, shortly after arriving in the spirit world, she realizes that she has been betrayed. A plot is afoot to use her as a weapon against her father, and it will take all of her training and magical talent to protect him and save Chinatown.

In the afterword, author Boroson freely admits that he has taken extensive liberties with the facts of Daoism in his story. What he has successfully done, though, is create a story with a strong heroine who faces multiple conflicts in her life. She loves her father, but must lie to him to use her ability. She dislikes crime and criminals, but serves the local Tong (Chinese gang) willingly because of the benevolent work they do. Li-Lin is a woman with a lot on her heart. She misses her husband. She loves her father. She respects the Tong. She feels protective of her city.

Any fantasy which includes a talking eyeball, a grumpy talking cat, a blue Buddhist tiger/man committed to peace, and seagulls to the rescue definitely has a lot going for it. Add that eclectic mix to a young woman learning to stand on her own two feet (and sometimes kicking the snot out of men with those same feet) and you get a very original story with an interesting take on late-1890s San Francisco Chinatown. This was a novel I thoroughly enjoyed.